Carbon and its Compounds

Question 1
Ethane, with the molecular formula C2H6 has

Question 3
While cooking, if the bottom of the vessel is getting blackened on the outside, it means that

(a) the food is not cooked completely.

(b) the fuel is not burning completely.

(d) the fuel is burning completely.

(b) The fuel is not burning completely.

Question 4
Explain the nature of the covalent bond using the bond formation in CH3Cl.

Answer:
Covalent bond is formed by sharing of electrons so that the combining atoms complete their outermost shell. 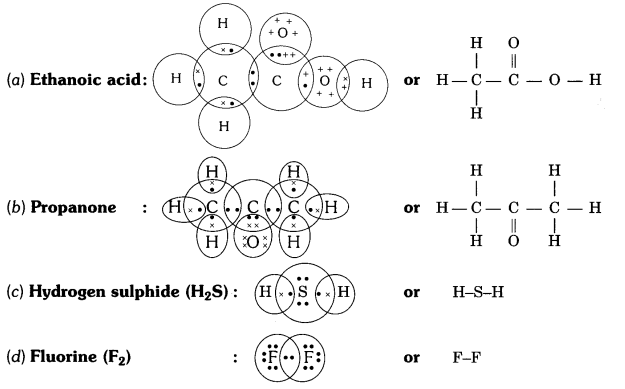 Question 6
What is a homologous series ? Explain with an example.

similar structures and similar chemical properties in which the successive compounds differ by -CH2 group.

formula of the homologous series of alkanes is CnH2n+2, in which ‘n’ denotes number of carbon and hydrogen

atoms in one molecule of alkane.

(ii) Any two adjacent homologues differ by one carbon atom and two hydrogen atoms in their molecular formulae.

(iii) The difference in the molecular masses of any two adjacent homologues is 14u.

(iv) All the compounds of a homologous series show similar chemical properties.

(v) The members of a homologous series show a gradual change in their physical properties with increase in molecular mass.

For example, general formula of the homologous series of alkanes is CnH2n+2, in which ‘n’ denotes number of

carbon atoms in one molecule of alkane. Following are the first five members of the homologous series of alkanes

Question 7
How can ethanol and ethanoic acid he differentiated on the basis of their physical and chemical properties ?

Difference on the basis of physical properties

Difference on the basis of chemical properties

Question 8
Why does micelle formation take place when soap is added to water ? Will a micell be formed in other solvents such as ethanol also ?

Answer:
Micelle formation takes place when soap is added to water because the hydrocarbon chains of soap molecules are hydrophobic (water repelling) which are insoluble in water, but the ionic ends of soap molecules are hydrophilic (water attracting) and hence soluble in water.
Such micelle formation will not be possible in other solvents like ethanol in which sodium salt of fatty acids do not dissolve.

Question 9
Why are carbon and its compounds used as fuels for most applications ?

Answer:
Carbon and its compounds give a large amount of heat per unit weight and are therefore, used as fuels for most applications.

Question 10
Explain the formation of scum when hard water is treated with soap.

Question 11
What change will you observe if you test soap with litmus paper (red and blue)?

Question 12
What is hydrogenation ? What is its industrial application ?

Application : The process of hydrogenation has an important industrial application. It is used to prepare vegetable ghee (or vanaspati ghee) from vegetable oils.

Question 14
Give a test that can be used to differentiate chemically between butter and cooking oil.

Question 15
Explain the mechanism of the cleaning action of soaps.

Answer:
When a dirty cloth is put in water containing dissolved soap, then the hydrocarbon end of the soap molecules in micelle attach to the oil or grease particles present on the surface of dirty cloth. In this way the soap micelle entraps the oily or greasy particles by using its hydrocarbon ends. The ionic ends of the soap molecules in the micelles, however, remain attached to water. When the dirty cloth is agitated in soap solution, the oily and greasy particles present on its surface and entrapped by soap micelles get dispersed in water due to which the soap water becomes dirty but the cloth gets cleaned. The cloth is cleaned thoroughly by rinsing in clean water a number of times. 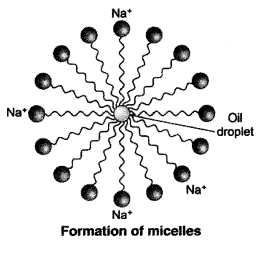 Question 1
What would be the electron dot structure of carbon dioxide which has the formula CO2 ?

Question 2
What would be electron dot structure of sulphur which is made up of eight atoms of sulphur. 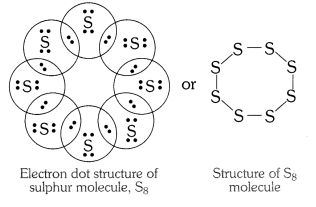 Question 1
How many structural isomers can you draw for pentane ?

Question 2
What are the two properties of carbon which lead to the huge number of carbon compounds we see around us ?

Question 3
What will be the formula and electron dot structure of cyclopentane ?

The molecular formula of cyclopentane is C5 H10 .

The electron dot structure of cyclopentane is given on the next page.

Question 4
Draw the structures for the following compounds :

Question 5
How would you name the following compounds ?

Question 1
Why is the conversion of ethanol to ethanoic acid an oxidation reaction ?

Answer:
Conversion of ethanol into ethanoic acid is an oxidation reaction because addition of oxygen to a substance is called oxidation. Here, oxygen is added to ethanol by oxidising agent like alkaline potassium permanganate or acidified potassium dichromate and it is converted into acid.

Question 2
A mixture of oxygen and ethyne is burnt for welding. Can you tell why a mixture of ethyne and air is not used ?

Answer:
A mixture of ethyne and air is not used for welding because burning of ethyne in air produces a sooty flame due to incomplete combustion, which is not enough to melt metals for welding.

Question 1
How would you distinguish experimentally between an alcohol and a carboxylic acid ?
Answer:

Differences between alcohol and carboxylic acid

Question 2
What are oxidising agents ?

Oxidising agents are the substances which give oxygen to another substances or which remove hydrogen from a substance.

For example, acidic K2Cr2O7 is an oxidising agent, that converts (oxidises) ethanol into ethanoic acid.

Question 1
Would you be able to check if water is hard by using a detergent ?

Answer:
No, because detergents can lather well even in hard water. They do not form insoluble calcium or magnesium salts (scum). On reacting with the calcium ions and magnesium ions present in the hard water.

Question 2
People use a variety of methods to wash clothes. Usually after adding the soap, they ‘beat’ the clothes on a stone, or beat it with a paddle, scrub with a brush or the mixture is agitated in a washing machine. Why is agitation necessary to get clean clothes ?