How Do Organisms Reproduce?

Question 2
Which of the following is not a part of the female reproductive system in human beings ?

(ii) In sexual reproduction the offspring, although similar to their parents, are not identical to them or to one another. This is because the offspring receive some genes from the mother and some from the father. Because of the mixing of genes of mother and father in various different combinations, all of the offspring have genetic variations. In this way, sexual reproduction leads to a greater variety in population. This means that a species (animal or plant) can adapt quickly to changes in its surroundings. This is because there are always likely to be some individuals which are more suited to the changes than others, and these individuals will survive and reproduce themselves.

Question 5
What are the functions performed by the testis in human beings ?

Answer:
The functions of testes in humans are following :
(i) After the stage of adolescent, testes produce male gametes in the human males which are called sperms.
(ii) A hormone called testosterone is produced in testes. Testosterone controls the development of reproductive organs and secondary sexual characters.

Question 6
Why does menstruation occur ?

Answer:
If the ovum (or egg) does not get fertilised (due to non-availability of sperm in the female body) then the thick and soft inner lining of uterus is no longer needed and hence it breaks. So, the thick and soft inner lining of uterus alongwith the blood vessels and the dead ovum (or egg) comes out of the vagina in the form of blood called menstruation. Menstruation occurs after the interval of every 28 days and the time period between ovulation and menstruation is about 14 days.

Question 7
Draw a labelled diagram of the longitudinal section of a flower. 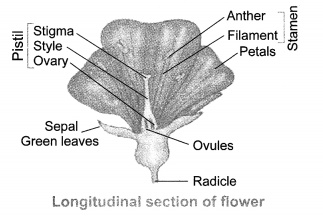 Question 8
What are the different methods of contraception ?

(i) Barrier method : In this method, condom, diaphragm and cervical caps are used. These prevent the entry of sperms in the female genital tract during sexual intercourse.

(ii) Chemical method : In this method a woman uses two kinds of pills (oral and vaginal pills). The oral pills are hormonal preparations which suppress the release of ovum in fallopian tube. These are called oral contraceptives. The vaginal pills/ creams are spermicidal. The chemicals in these spermicidals kill the sperms during their journey in the vaginal tract.

(iv) Surgical method : In this method, a small part of vas deferens of male and fallopian tube of female is cut or tied by surgery. It is called vasectomy in males and tubectomy in females.

Question 9
How are the modes for reproduction different in unicellular and multicellular organisms ?

Question 10
How does reproduction help in providing stability to populations of species ?

Answer:
The introduction of variations during reproduction provides stability to the populations of various species by preventing them from getting wiped out during adverse conditions. Reproduction also helps to generate copies of individuals which are suited to a particular environment.

Question 11
What could be the reasons for adopting contraceptive methods ?

The reasons for adopting contraceptive devices are as follow:

1. To control the birth rate and prevent the increase in population.
2. To reduce the adverse effects on mother’s body due to frequent pregnancy.
3. To provide safety from sexually transmitted diseases.

Question 1
What is the importance of DNA copying in reproduction?

Question 2
Why is variation beneficial to the species but not necessarily for the individual?

Answer:
The various populations of organisms interact with many types of ecological niches. This is important for them to survive in given conditions. In case of any damage caused to the ecological conditions of the population, the population gets adversely affected. The organisms which are able to survive, may reproduce to develop population which is adapted or suited to the varied conditions. Hence variation is beneficial to species, but not to the individuals.

Question 1
How is the process of pollination different from fertilisation ?

Question 2
How will an organism be benefited if it reproduces through spores ?

Question 3
Can you think of reasons why more complex organisms cannot give rise to new individuals through regeneration ?

For example, a dog is a complex multicellular organism which cannot be regenerated from its cut body part say, a cut tail. This is because the cells present in the cut tail of a dog cannot produce dog’s organs like heart brain, lungs, stomach, intestines and limbs, etc, needed for the making of a complete dog.

Question 4
Why is vegetative propagation practised for growing some types of plants ?

Answer:
Vegetative propagation is practiced for growing such plants which usually do not produce seeds or produce non-viable seeds.

Question 5
Why is DNA copying an essential part of the process of reproduction ?

Answer:
DNA copying is essential part of the process of reproduction so that the characteristics of the parent organisms are transmitted to its offspring and at the same time some occasional variations are also produced in the offspring. The changes in the copy of DNA provide an organism the capability to survive in changing conditions.

Question 1
How is the process of pollination different from fertilisation ?

Question 2
What is the role of the seminal vesicles and the prostate gland ?

Answer:
(i) Both seminal vesicle and prostate gland secretes fluids which forms a part of the semen. The fluid secreted from seminal vesicle forms 60% of semen while the fluid secreted from the prostate gland forms 30% of the semen. It makes the path smooth through which the sperms travel.
(ii) This fluid protects the sperms from the acids present in the urethra.
(iii) This fluid provides nutrition to sperms in the form of fructose, calcium and some enzymes.

Question 3
What are the changes seen in girls at the time of puberty ?

The various changes occur in girls at puberty are :

Question 4
How does the embryo get nourishment inside the mother’s body ?

Answer:
In mother’s body, the embryo gets nutrition from the mother’s blood. For this, there is a special structure, called placenta. Placenta contains villi. There are empty spaces in mother’s tissues that cover the villi. It provides a large surface area for the transfer of glucose, oxygen and other substances from the mother to the embryo.

Question 5
A woman is using a copper-T. Will it help in protecting her from sexually transmitted diseases ?

Answer:
Copper-T is a contraceptive method which prevents implantation of the zygote inside the uterus. It cannot prevent a women from sexually transmitted diseases. These diseases are transmitted by contact which cannot be prevented by copper-T.