Nutrition in Plants: Green plants prepare their own food. They make food in the presence of sunlight. Sunlight provides energy’, carbon dioxide and water are the raw materials and chloroplast is the site where food is made.

What is Photosynthesis in biology class 10?

How do raw materials for photosynthesis become available to the plant?

Other steps are part of the dark reaction during photosynthesis. 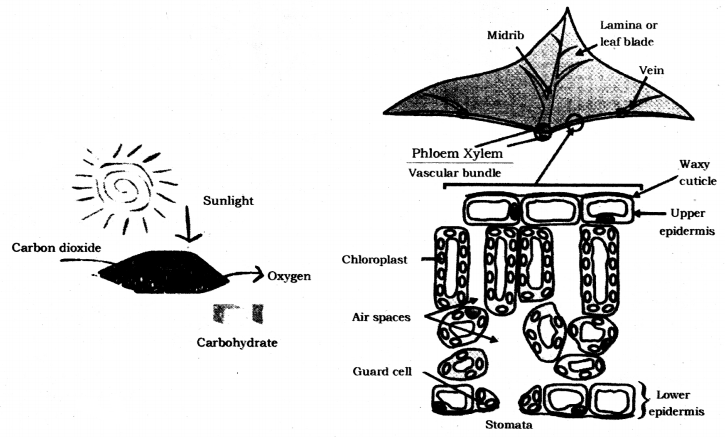 Opening and closing of stomatal pores:

Structure of the Human Digestive System:
The human digestive system comprises of the alimentary canal and associated digestive glands. 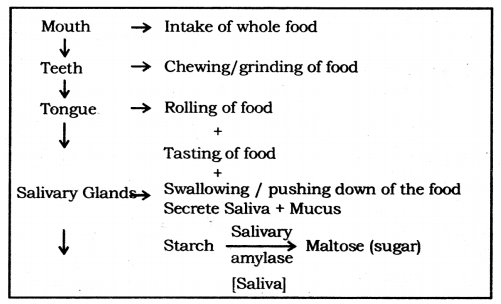 Oesophagus: Taking food from mouth to stomach by Peristaltic movement.

Peristaltic movement: Rhythmic contraction of muscles of the lining of the alimentary canal to push the food forward.

Liver: Liver is the largest organ in the human body. The liver manufactures bile, which gets stored in the gall bladder. From the gall bladder, bile is released as and when required.

Pancreas: Pancreas is situated below the stomach. It secretes pancreatic juice which contains many digestive enzymes. 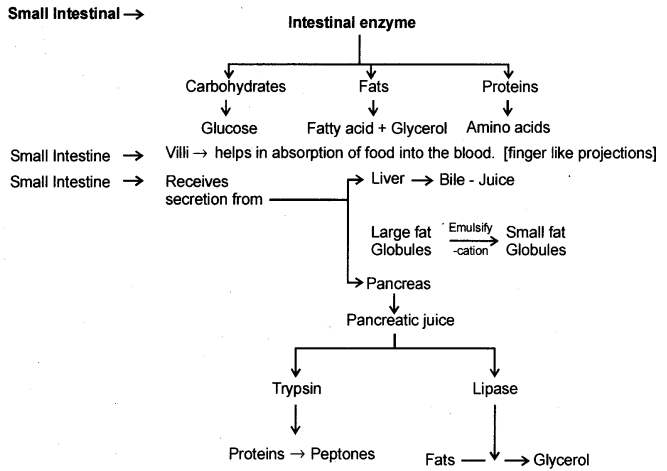 Bile and pancreatic juice go to the duodenum through a hepatopancreatic duct. Bile breaks down fat into smaller particles. This process is called emulsification of fat. After that, the enzyme lipase digests fat into fatty acids and glycerol. Trypsin and chymotrypsin are enzymes which digest protein into amino acids. Complex carbohydrates are digested into glucose. The major part of digestion takes place in the duodenum.

Respiration: The process by which a living being utilises the food to get energy, is called respiration. Respiration is an oxidation reaction in which carbohydrate is oxidized to produce energy. Mitochondria is the site of respiration and the energy released is stored in the form of ATP (adenosine triphosphate). ATP is stored in mitochondria and is released as per need.

The equations for the above reactions can be written as follows: 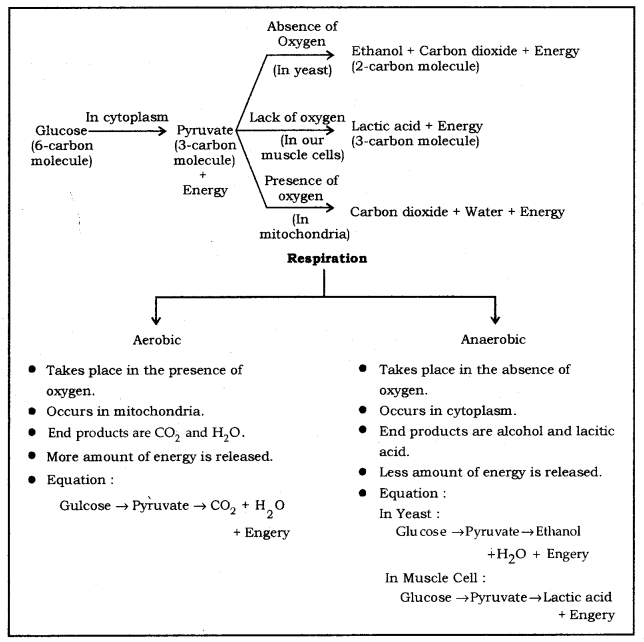 Pain in leg muscles while running: 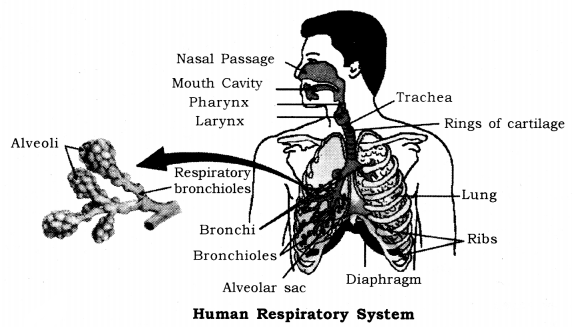 Passage of air through the respiratory system in human beings: 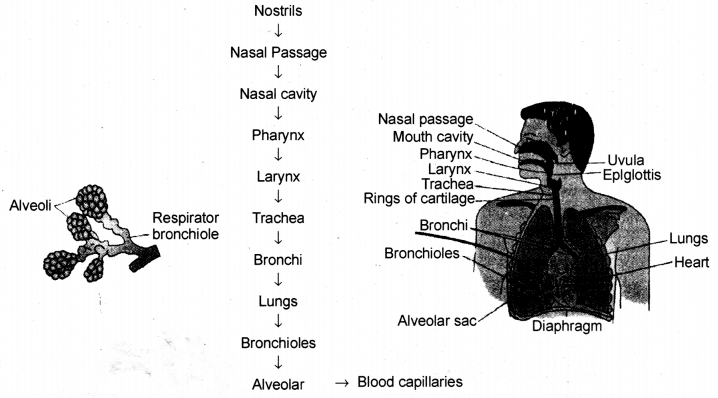 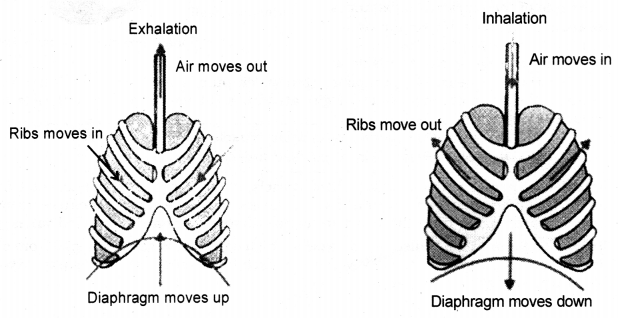 Transportation in Human Beings: The circulatory system is responsible for transport of various substances in human beings. It is composed of the heart, arteries, veins and blood capillaries. Blood plays the role of the carrier of substances. 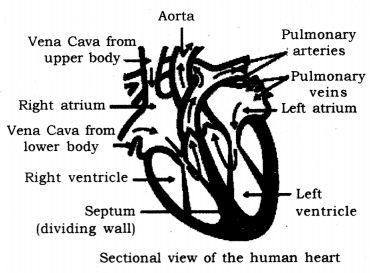 1. Heart: Heart is a muscular organ, which is composed of cardiac muscles. 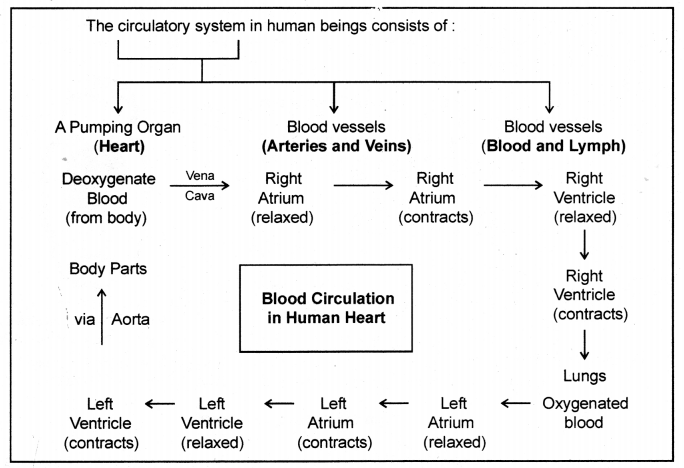 4. Capillaries: These are the blood vessels which have single-celled walls.

Blood: Blood is a connective tissue which plays the role of the carrier for various substances in the body. Blood is composed of 1. Plasma 2. Blood cells 3. Platelets. 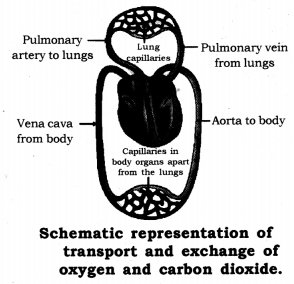 Ascent of sap: The upward movement of water and minerals from roots to different plant parts is called ascent of sap. Many factors are at play in ascent of sap and it takes place in many steps. They are explained as follows :

Transport of food from leaves (food factory) to different parts of the plant is called Translocation. 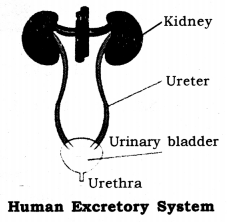 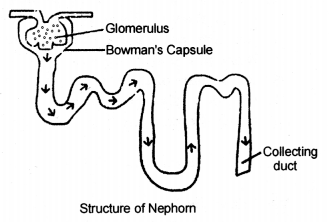 Haemodialysis: The process of purifying blood by an artificial kidney. It is meant for kidney failure patient.

Nutrition in Plants and Animals

Nutrition: Process of obtaining and utilizing of food is known as nutrition.

Autotrophs: It is a mode of nutrition in which organisms can make their own food from simple raw material. Example, all green plants.

Heterotrophs: It is a mode of nutrition in which organisms cannot prepare their food on their own and depend on others. Example, animals.

Saprotrophic Nutrition: It is the process by which the organism feeds on dead and decaying matter. Example, Rhizopus, Mucor, yeast.

Photosynthesis: It is the process by which green plants prepare their own food.

Products of Photosynthesis: Carbohydrate-glucose- It is converted to starch.

Symbiotic relationship: Two organisms live in a close association and develop a relationship that is beneficial to both this is called a symbiotic relationship.
Example, Lichen is a living partnership between a fungus an alga. Fungus absorbs water and provides shelter and alga prepare food by photosynthesis

Insectivores: Plants feed on insects for their nitrogen requirements.

Teeth: An organ which breaks down the complex food and helps in chewing the food.

Tongue: A muscular organ attached to the floor of the buccal cavity which helps in tasting and mixing the food with saliva for digestion.

Transportation in Plants and Animals

Excretion in Plants and Animals