Metals are the elements which form positive ions by losing electrons. Thus, metals are known as Electropositive Elements.

Reaction of Copper metal with Oxygen: Copper does not react with oxygen at room temperature but when burnt in air, it gives oxide.

Silver, gold and platinum do not combine with the oxygen of air even at high temperature. They are the least reactive.

2. Reaction of metals with water: Metals form respective hydroxide and hydrogen gas when reacting with water.
Metal + Water → Metal hydroxide + Hydrogen
Most of the metals do not react with water. However, alkali metals react vigorously with water.

Reaction of Sodium metal with Water: Sodium metal forms sodium hydroxide and liberates hydrogen gas along with lot of heat when reacting with water.

Reaction of Calcium metal with Water: Calcium forms calcium hydroxide along with hydrogen gas and heat when react with water.

When steam is passed over magnesium metal, magnesium oxide and hydrogen gas are formed.

Reaction of Zinc metal with Water: Zinc metal produces zinc oxide and hydrogen gas when steam is passed over it. Zinc does not react with cold water.

Reaction of Iron with Water: Reaction of iron with cold water is very slow and comes into notice after a long time. Iron forms rust (iron oxide) when reacts with moisture present in the atmosphere. Iron oxide and hydrogen gas are formed by passing of steam over iron metal.

Other metals usually do not react with water or react very slowly. Lead, copper, silver and gold do not react with steam. Thus, the order of reactivity of different metals towards water may be written as :
K > Na > Ca > Mg > Ae > Zn > Fe > Pb > Cu > Ag > Au

Hydrogen (H2) gas is not evolved when metal is treated with nitric acid (HNO3):
Nitric acid is strong oxidising agent and it oxidises the hydrogen gas (H2) liberated into water (H2O) and itself get reduced to some oxide of nitrogen like nitrous oxide (N2O)3 nitric oxide (NO) and nitrogen dioxide (NO2).
Copper, gold, silver are known as noble metals. These do not react with water or dilute acids.
The order of reactivity of metal towards dilute hydrochloric acid or sulphuric acid is in the order;
K > Na > Ca > Mg > Al > Zn > Fe > Cu > Hg > Ag

Zinc oxide behaves like a base when reacts with acid. Zinc oxide gives zinc chloride and water on reaction with hydrochloric acid.

Aluminium oxide gives aluminium chloride along with water when it reacts with hydrochloric acid. 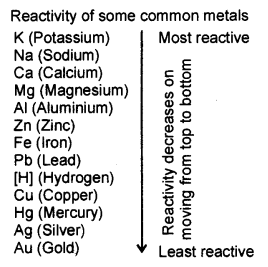 4. Reaction of metals with solution of other metal salts: Reaction of metals with the solution of other metal salt is displacement reaction. In this reaction, more reactive metal displaces the less reactive metal from its salt.
Metal A + Salt of metal B → Salt of metal A + Metal B
Examples :
Iron displaces copper from copper sulphate solution.

Similarly, aluminium and zinc displace copper from the solution of copper sulphate.

In all the above examples, iron, aluminium and zinc are more reactive than copper. This is why they displace copper from its salt solution.
When copper is dipped in the solution of silver nitrate, it displaces silver and forms copper nitrate.

In the reaction, copper is more reactive than silver and hence, displaces silver from silver nitrate solution.
Silver metal does not react with copper sulphate solution because silver is less reactive than copper and not able to displace copper from its salt solution.

Similarly, when gold is dipped in the solution of copper nitrate, no reaction takes place because copper is more reactive than gold.

In similar way, no reaction takes place when copper is dipped in the solution of aluminium nitrate because copper is less reactive than aluminium.

Carbon in the form of graphite is non-metal which conduct electricity.

Iodine is non-metal which is lustrous having a shining surface.

Carbon in the form of diamond is a non-metal which is extremely hard.

Diamond is a non-metal which has a very high melting point and boiling point.

Chemical properties of Non-metals
1. Reaction of Non-metals with Oxygen: Non-metals form respective oxide when reacting with oxygen.
Non-metal + Oxygen → Non-metallic oxide
When carbon reacts with oxygen, carbon dioxide is formed along with the production of heat.

When hydrogen reacts with oxygen it gives water.

Nitrogen combines with hydrogen in presence of an iron catalyst to form covalent hydride ammonia.

Non-metals do not react with water (or steam) to evolve Hydrogen gas.

Non-metals do not react with dilute acids.

4. Reaction of Metal and Non-metal: Many metals form ionic bonds when they react with non-metals. Compounds so formed are known as Ionic Compounds.
Ions: Positive or negative charged atoms are known as ions. Ions are formed because of loss or gain of electrons. Atoms form ions obtain by the electronic configuration of the nearest noble gas.
Positive ion: A positive ion is formed because of the loss of electrons by an atom.

Negative ion: A negative ion is formed because of the gain of an electron.
Some examples are given below :
Chlorine gains one electron in order to achieve a stable configuration. After the loss of one electron, chlorine gets one negative charge over it forming chlorine ion.

Mineral: Minerals are naturally occurring substances which have a uniform composition.

Ores: The minerals from which a metal can be profitably extracted are called Ores.
Metals found at the bottom of reactivity series are least reactive and they are often found in nature in free-state; such as gold, silver, copper, etc. Copper and silver are also found in the form of sulphide and oxide ores.

Extraction of Metals: Metals can be categorised into three parts on the basis of their reactivity: Most reactive, medium reactive and least reactive.
The three major steps involved in the extraction of a metal from its ore are 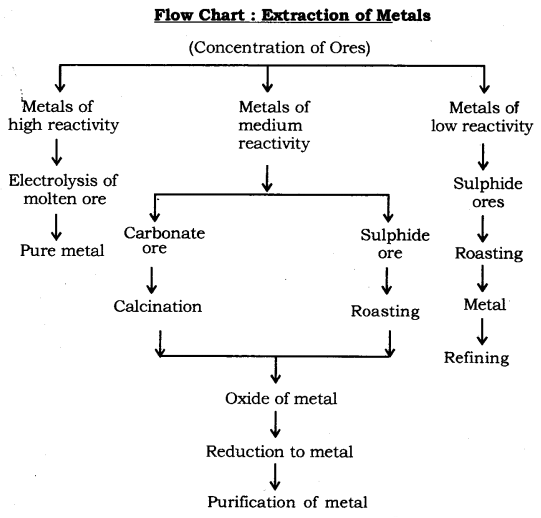 2. Conversion of Concentrated Ore into Crude Metal
Conversion of metals ores into oxides: It is easy to obtain metals from their oxides. So, ores found in the form of sulphide and carbonates are first converted to their oxides by the process of roasting and calcination. Oxides of metals so obtained are converted into metals by the process of reduction.

Roasting: Heating of sulphide ores in the presence of excess air to convert them into oxides is known as Roasting.

Calcination: Heating of carbonate ores in the limited supply of air to convert them into oxides is known as Calcination.

3. Reduction: Heating of oxides of metals to turn them into metal is known as Reduction.
(i) Extraction of Metals of Least Reactivity: Mercury and copper, which belong to the least reactivity series, are often found in the form of their sulphide ores. Cinnabar (HgS) is the ore of mercury. Copper glance (Cu2S) is the ore of copper.
Extraction of Mercury Metal: Cinnabar (HgS) is first heated in air. This turns HgS (mercury sulphide or cinnabar) into HgO (mercury oxide) by liberation of sulphur dioxide. Mercury oxide so obtained is again heated strongly. This reduces mercury oxide to mercury metal.

Zinc oxide so obtained is reduced to zinc metal by heating with carbon (a reducing agent).

Extraction of Iron from Haematite (Fe2O3): Haematite ore is heated with carbon to be reduced to iron metal.

Extraction of Lead from Lead oxide: Lead oxide is heated with carbon to be reduced to lead metal.

Thermite Reaction: Ferric oxide; when heated with aluminium; is reduced to iron metal. In this reaction, a lot of heat is produced. The thermite reaction is used in the welding of electric conductors, iron joints, etc. such as joints in railway tracks. This is also known as Thermite Welding (TW).

(iii) Extraction of Metals of High Reactivity: Metals of high reactivity; such as sodium, calcium, magnesium, aluminium, etc. are extracted from their ores by electrolytic reduction. These metals cannot be reduced using carbon because carbon is less reactive than them.
Electrolytic Reduction: Electric current is passed through the molten state of metal ores. Metal being positively charged is deposited over the cathode.
Example: When an electric current is passed through molten state or solution of sodium chloride, sodium metal gets deposited over the cathode. 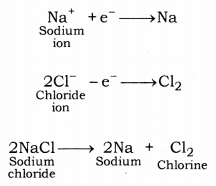 Metals obtained from the process of electrolytic reduction are pure in form.

4. Refining or purification of metals: Metals extracted from various methods contains some impurities, thus, they are required to be refined. Most of the metals are refined using electrolytic refining. 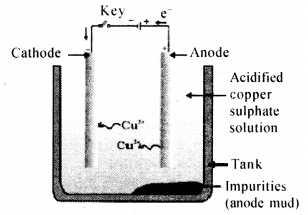 5. Corrosion: Most of the metals keep on reacting with the atmospheric air. This leads to the formation of a layer over the metal. In the long run, the underlying layer of metal keeps on getting lost due to conversion into oxides or sulphides or carbonate, etc. As a result, the metal gets eaten up. The process is called Corrosion.

Rusting of Iron: Rusting of iron is the most common form of corrosion. When iron articles like the gate, grill, fencing, etc. come in contact with moisture present in the air, the upper layer of iron turns into iron oxide. Iron oxide is brown-red in colour and is known as Rust. The phenomenon is called Rusting of Iron.
If rusting is not prevented in time, the whole iron article would turn into iron oxide. This is also known as Corrosion of Iron. Rusting of iron gives a huge loss every year.

Prevention of Rusting: For rusting, iron must come in contact with oxygen and water. Rusting is prevented by preventing the reaction between atmospheric moisture and the iron article. This can be done by:

6. Alloys: The homogeneous mixture of two or more metals, or a metal and a non-metal is called Alloy.
Types of alloys :

Properties of an Alloy

Some examples of Alloys:

Chemical Properties of Metals and Non-metals.
The reaction of metals with oxygen. Metals form their oxides when reacting with oxygen.
Metal + Oxygen → Metal oxide
Metal oxides are basic in nature. Example, Reaction of Iron metal with oxygen When iron reacts with moist air, it forms rust.

Rust is iron oxide. Articles made of iron, such as grills, fencing, etc. are getting rusted because of reaction with moist air.
Iron (Fe) + Water (H2O) + Oxygen (O2) → Fe3O4n.H2O (Iron II, III) Oxide (Rust)
Rust is reddish brown in colour and is iron oxide. Iron oxide is basic in nature. It turns red litmus blue.

Rusting of iron can be prevented:

You can observe that when coal (carbon) is burnt it forms smoke, which contains carbon dioxide. Carbon dioxide is acidic in nature. The solution of carbon dioxide in water turns blue litmus paper red.
CO2 + H2O → Carbonic acid (H2CO3)

When copper metal is dipped in the solution of aluminium nitrate, no reaction takes place. Because copper is less reactive than aluminium. 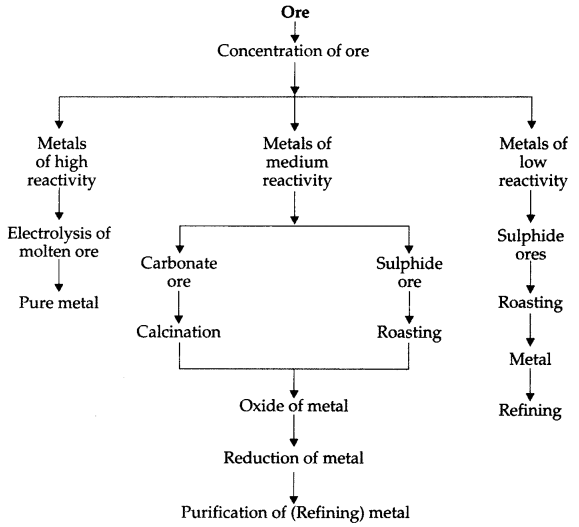