Biodegradable and Non-biodegradable Wastes, Ecosystem, Components of Ecosystem. The environment includes our physical surroundings like air (or atmosphere), water bodies, soil (land and all the organisms such as plants, animals, human beings and micro-organisms like bacteria and fungi (called decomposers). The waste materials produced by the various activities of man £nd animals are poisonous to some extent and can be divided into two main groups

1. Biodegradable Wastes: Substances that are broken down by the biological processes are said to be biodegradable. These substances are decomposed through the actions of fungi, bacteria, and other living organisms. Temperature and sunlight also play an important role in the decomposition of biodegradable substances.
For Examples: Food waste, trees leaves, urine and fecal matter, sewage agricultural residue, paper, wood, cloth, cow-dung etc.

2. Non-Biodegradable Wastes: Substances that are not broken down by biological
processes. These substances may be in solid, liquid or gaseous form. These substances are inert and simply persist in the environment for a long time or may harm the various members of the ecosystem.
For Examples: These includes DDT (Di-chloro-di phenyl trichloro ethane-in-pheneyle the cheoro ethane), insecticides, pesticides, mercury, lead, arsenic aluminum, plastics, polythene bags, glass, radioactive wastes. These non-biodegradable wastes are major pollutants of the environment.

Ecosystem: An ecosystem is a self-contained unit of living things (plants, animals and decomposers), and their non-living environment (soil, air and water). For example; a forest, a pond, a lake, a green land etc.
In an ecosystem, energy and matter are continuously exchanged between living and non¬living components.

An ecosystem can be both natural or man-made. Some examples of natural ecosystems are grass land, forest, sea, river, desert, mountain, pond, lake etc.

(i) Herbivores: These are organisms (animals) which get their food by eating the producers (or plant) directly. Herbivores are also called first order consumers. Some common examples of herbivores are : deer, rabbit, rat, squirrel, goat, cattle, etc.

(iii) Omnivores: The organisms which feed on both plants and animals are called omnivores. Human beings are common example of omnivores because they eat both plants (For example; pulses, grams, oilseeds, fruit, etc.) and animal products (milk, meat, egg, etc.).

(c) Decomposers: Fungi and bacteria which break down (decompose) the dead plants, animals complex compounds into the simpler one. The decomposers help in the replenishment of natural resources. These are also known as microorganism or saprotrophs. These are also called reducers.

2. Abiotic Components: These are non-living components of an ecosystem. These include the physical environment.

Climatic factors: These are sunlight temperature, pressure humidity, moisture, rainfall, etc. these factors affect the distribution of the organisms.

Functions of an Ecosystem

Food Chain: The sequence of living organisms in a community in which one organism consumes another organism to transfer food energy, is called a food chain.
A food chain is unidirection where transfer of energy takes place in only one direction.
OR
Food chain is sequential process which represents “who eats whom”.
OR
Food chain refers to an arrangement of different biotic groups in a sequence of energy transfer. These biotic groups are producer herbivores, carnivores.
For example, T1(Grass) → T2(Deer) → T3(Lion)

Examples of Food Chains: Simple food chain operating in a grass land or forest
Grass(Producer) → Deer(Herbivore) → Lion(Carnivore)
In this food chain, grass represent the producers (first tropic level). Grass synthesize their own food by the process of photosynthesis. Grass is eaten up by deer, which represents the herbivores or the primary consumers. Deer in turn is consumed by lion, the carnivores or the secondary consumers.
A food chain in grassland which has four steps is :
Grass(Producers) → Insect(Herbivores) → Frog(Carnivores) → Eagle(Secondary Carnivore)

Food Web: The inter-connected food chains operating in an ecosystem which establish a network of relationship between various species, are called a food web.
In a food web, one organism may occupy a position in more than one food chain. An organism can obtain its food from different sources and in turn, may be eaten up by different types of organisms. 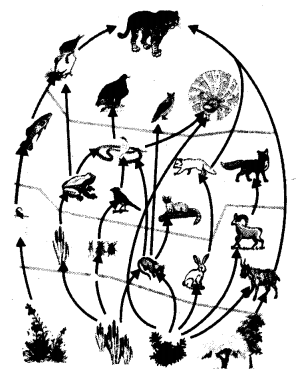 Trophic Levels: The various steps in the food chain at which the transfer of food (or energy) takes place is called trophic levels.
There is a gradual decrease in the amount of energy transfer from one trophic level to the next trophic level in a food chain.

Flow Open Energy
Energy is used and conveyed from one trophic level to another in a food chain. This is called flow of energy. Green plants capture about 1% of the solar energy incident on the Earth through the biochemical process of photosynthesis. A part of this trapped energy is used by plants in performing their metabolic activities and some energy is released as heat into the atmosphere. The remaining energy is chemical energy stored in the plants as ‘carbohydrates’. When plants are eaten up by herbivores, the chemical energy stored in the plants is transferred to these animals. These animals (herbivores) utilize some of this energy for metabolic activities, some energy is “released as heat and the remaining energy is stored. The process of energy transferred is similarly repeated with carnivores and so on.

Depletion of Ozone Layer: Ozone (O3) layer is largely found in the stratosphere which is a part of our atmosphere from 12 km -50 km above sea level. This region is called ozonosphere. Ozone is deadly poisonous at the ground level.
Ozone is formed as a result of the following photochemical reaction.

Ozone layer is a protective blanket around earth which absorbs most of the harmful U.V. (Ultraviolet) radiation of the Sun, thus, protecting the living beings of the Earth from health hazards like skin cancer, cataract in eyes, weaken immune system, destruction of plants etc. The decline of Ozone layer thickness in Antarctica was first discovered in 1985 and was termed as OZONE HOLE.

Steps taken to limit damage of ozone layer: Excessive use of CFCs (Chloro Flouro Carbon) a synthetic, inert chemical. For example; Freon which are used as refrigerants and also in fire extinguishers caused Ozone depletion in the upper atmosphere. A single chlorine atom can destroys 1,00,000 Ozone molecules. U.N.E.P. (United Nation Environment Programme) did an excellent job in forging an agreement to freeze CFC production at 1986 levels (KYOTO Protocol) by all countries.

Biological Magnification: The increase in concentration of harmful chemical substances like pesticides in the body of living organisms at each trophic level of a food chain is called biological magnification.
Example:

Maximum concentration of such chemicals gets accumulated in human bodies.

Garbage Disposal: Industrialization and rise in demand of consumer goods have created a major problem in the form of wastes/garbage accumulation and its disposal especially in urban areas.
The disposal of waste should be done in a scientific way. There are different methods of waste disposal. The method to be used depends on the nature of the waste. Some of the important modes of waste disposal are :

Environment: The combination of all the physical and biological conditions affecting the responses of living organisms is called environment.

Garbage: Domestic wastes including the kitchen waste are termed as garbage.

Incineration: Destruction of waste materials by burning at high temperature is called incineration.

Biotic Community: A group of various populations of organisms living in a region is called the biotic community.

Ecosystems: The self-contained and distinct functional unit capable of independent existence made by the interaction of living and non-living components is called an ecosystem.

Autotrophs: Those organisms which can produce their own food are called autotrophs or producers. All green plants are producers.

Consumers: Those organisms which are unable to synthesise their food themselves and consume the food produced by producers or eat other organisms as food, are known as consumers.

Decomposers: Bacteria and fungi which break down the complex organic compounds present in the dead plants and animals and their products into simpler substances are known as decomposers.

Food Chain: A series of organisms in a community in which one organism consumes another organism to transfer food energy is called a food chain.
Characteristics:

Food Web: The web formed by the interconnection of food-chains of the various trophic levels is called a food web.

Biomagnification: The increase in the concentration of the harmful chemicals in the body of an
organism per unit its mass at each successive trophic level in a food chain is known as biomagnification.

Ozone Depletion: The thinning of the ozone layer is called ozone depletion.

Four practices which can help in the protection of our environment:

Harmful effects of agricultural practices on the environment.

1. Environment: The physical, chemical and ‘ biological conditions of the region in which an organism lives is called its Environment. It includes air, light, soil, temperature, water and the presence or absence of other organisms, i.e., the conditions for development or growth.
The environment has three main components, viz :

2. Physical environment: It is also called a abiotic or non-living environment. It includes :

The physical environment is essential for :

3. Biotic (or biological) environment: It includes :

Other important constituents of the biotic environment includes Kites and vultures as they feed on dead organisms and act as scavengers (cleansing agents) of the environment.

4. Ecosystem: A community of organisms, interacting with each other, plus the environment in which they
live and with which they also interact. The examples of the ecosystem are a pond; a desert; a forest; a lake; a river; a mountain; the sea.
All the above ecosystems are made up of two main components.

6. Food chain: The sequence of living organisms in a . community in which one organism.e^ts other and is
itself eaten by another organism to transfer energy is called a food chain. It is also defined as, “chain of organisms, existing in any natural community, through which energy is transferred”.

7. Ozone layer : Ozone (O3) is a molecule formed by three atoms of oxygen unlike oxygen which is required for respiration by aerobic forms, ozone is a deadly poison. However, at the higher levels of the atmosphere,

ozone performs an essential function. It shields the surface of the earth from ultraviolet (UV) radiation from the Sun. This radiation is highly damaging to organisms, for example, it is known to cause skin cancer in human beings.
Ozone at the higher levels of the atmosphere is a product of UV radiation, acting on oxygen (O2) molecule. The higher energy UV radiations split apart some molecular
oxygen (O2) into free oxygen (O) atoms. These atoms then combine with the molecular oxygen to form ozone as shown:

Depletion of ozone layer: Ozone layer gets depleted – due to the use of chemicals called aerosol, spray propellants like chlorofluorocarbons. Depletion of ‘ ozone layer would cause skin cancer in men and animals and severe damage to the plants. 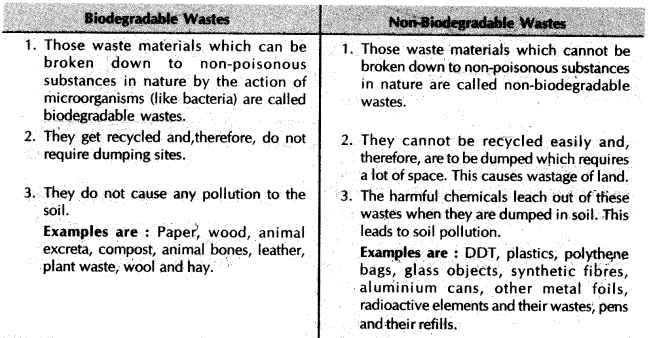 13. The flow of energy between various components of the environment: