Major Domains of the Earth

(a) The four major domains of the earth are—Lithosphere, Atmosphere, Hydrosphere and Biosphere.
(b) Asia, Europe, Africa, North America, South America, Australia and Antarctica.
(c) Australia and Antarctica.
(d) Troposphere, Stratosphere, Mesosphere, Thermosphere and Exosphere.
(e) More than 71% of the earth is covered with water. Hence, it is known as the ‘blue planet’.
(f) The greater part of the landmass lies in the Northern Hemisphere. Hence, it is called land Hemisphere.
(g) Biosphere is important for living organisms because it is here that three essential elements of life (land, water and air) are found.

(a) The mountain range that separates Europe from Asia is
(i) the Andes (ii) the Himalayas (iii) the Urals.

(b) The continent of North America is linked to South America by
(i) an Isthmus (ii) a Strait (iii) a Canal.

(c) The major constituent of atmosphere by percent is
(i) Nitrogen (ii) Oxygen (iii) Carbon dioxide.

(d) The domain of the earth consisting of solid rocksis
(i) the Atmosphere (ii) the Hydrosphere (iii) the Lithosphere.

Choose the correct option to complete the sentences given below:
(i) Life exists in this zone:
(a) Lithosphere (b) Biosphere
(c) Hydrosphere (d) Atmosphere.

(ii) It is the only continent through which the tropic of Cancer, the Equator and the Tropic of Capricorn pass:
(a) Asia (b) Europe
(c) Africa (d) North America.

(iii) It is world’s longest mountain range
(a) The Mt. Everest (b) The Ural Mountains
(c) The Karakoram range (d) The Andes. 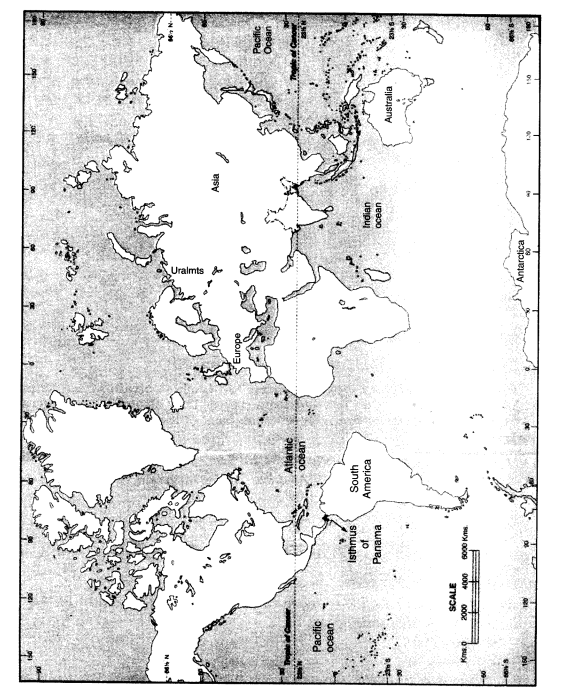 (iv)Which ocean is ‘S’ shaped?
(a) The Pacific Ocean (b) The Atlantic Ocean
(c) The Indian Ocean (d) The Arctic Ocean.

(v) Which one is not the layer of Atmosphere?
(a) The Biosphere (b) The Troposphere •
(c) The Stratosphere (d) The Mesosphere.

(vi) It is called an island continent
(a) South America (b) Antarctica
(c) Africa (d) Australia.

III. True/False
State whether these sentences are true (T) or false (F).
(i) The shape of the Pacific Ocean is almost triangular.
(ii) A very small part of Africa lies in the Northern Hemisphere.
(iii) The level of seawater remains the same everywhere.
(iv) Air moves from low pressure to high pressure.
(vi) Carbon dioxide is an important constituent of air.
(vii) The atmosphere is composed mainly of nitrogen and oxygen.

IV.Matching Skill
Match the items in column A correctly with those given in column B.

1. Which is larger—Europe or Australia?


Answer: Europe is larger than Australia.

2. How is nitrogen a significant gas?


Answer: Nitrogen helps in the growth of living organisms.

3. What is the Junction of carbon dioxide?


Answer: Carbon dioxide absorbs the heat radiated by the earth and thus keeps the planet warm.

4. What is the height of the Mt. Everest?

5. In which Hemisphere does Asia lie?

6. Name the world’s largest hot desert. Where is it located?


Answer: The Sahara desert. It is located in Africa.

7. How is North America linked to South America? [Imp.]


Answer: North America is linked to South America by a narrow strip of land called the Isthmus of Panama.

8. Name the Oceans that surround the continent—North America.


Answer: The Pacific Ocean, the Atlantic Ocean and the Arctic Ocean.

9. Which two oceans surround South America on the east and the west?


Answer: On the east—the Atlantic Ocean On the west—the Pacific Ocean.

10. Name the research stations of India in Antarctica.

11. What percent of the earth is covered with water? [Imp.]


Answer: More than 71 per cent of the earth is covered with water.

12. What percent of earth is covered with land?


Answer: 29 per cent of earth is covered with land.

13. How much of the earth’s water is found in the oceans?


Answer: More than 97 percent of the earth’s water is found in the ocean.


Answer: It is because the ocean water is very salty.

15. Why do the mountaineers carry with them oxygen cylinders?[Imp*]


Answer: The mountaineers carry with them oxygen cylinders so that they can easily breathe at high altitudes.

16. What is the nature of the temperature?


Answer: The temperature decreases as we go upwards.

17. Name the continents that surround the pacific ocean.

18. Which is the busiest ocean from the point of view of commerce?


Answer: The Atlantic ocean is the busiest ocean from the point of view of commerce.


Answer: (i)Cutting of forests for wood.
(ii)Clearing land for agriculture.

20. What happened to Andaman and Nicobar islands during Tsunami? [V. Imp.]


Answer: Parts of these islands were submerged under water during Tsunami.

21. What makes the water of lakes and rivers unsuitable for human use?


Answer: Discharge of waste material into lakes and rivers makes the water unsuitable for human use.

1. Mention the three main components of the environment. [V. Imp.]

2. Write a short note on the ‘hydrosphere’.


Answer: The hydrosphere refers to the water bodies that are found on the earth’s surface. More than 71% of the earth is covered with water. This water is found in all its forms—ice, water and water vapour. Running water in oceans and rivers and in lakes, ice in glaciers, underground water and the water vapour in atmosphere. More than 97% of the earth’s water is found in oceans. The ocean water is very salty, hence not of human utility. A large proportion of the rest of water is in the form of the icesheets and glaciers or under the ground. A very small percentage (0.03%) is available as fresh water. It is this water that we use.


Answer: The biosphere is a narrow zone of the earth where land, water and air interact with each other to support life. It is in this zone that life exists. There are several species of organisms that vary in size from microbes and bacteria to large mammals. All living organisms including humans are linked to each other and to the biosphere for survival.

4. Give an account of the composition of the atmosphere. Also, discuss the importance of the components. [V. Imp.]


Answer: The atmosphere is composed mainly of nitrogen and oxygen. Together they make up about 99% of clean, dry air. Nitrogen 78% and oxygen 21%. Apart from these two major gases, there are other gases too in the atmosphere. These gases include carbon dioxide, argon and others comprise 1% by volume. ‘
Oxygen is the breath of life while nitrogen helps in the growth of living organisms. Carbon dioxide absorbs heat radiated by the earth. In this way, it keeps the planet warm. It is also essential for the growth of plants.

5. What is atmosphere? Write about its different layers.


Answer: The atmosphere is a thin blanket of air that surrounds the earth. It provides us with the air we breathe and protects us from the harmful effects of sun’s rays. The atmosphere extends up to a height of about 1,600 km. The atmosphere is divided into five layers based on composition, temperature and other properties. These layers are—the troposphere, the stratosphere, the mesosphere, the thermosphere and the exosphere.

1. Give the details of all the major continents. [V. Imp.]


Answer: There are seven major continents—Asia, Europe, Africa, North America, South America, Australia and Antarctica.
1. Asia is the largest continent. It covers about one-third of the total land area of the earth. It lies in the Eastern Hemisphere. The Tropic of Cancer passes through this continent. Asia is separated from Europe by the Ural mountains on the west. The combined land mass of Europe and Asia is called Eurasia (Europe + Asia).
2.Europe.This continent lies to the west of Asia. The Arctic circle passes through it. It is bound by water bodies on three sides.
3.Africa.It is the second largest continent after Asia. The Equator or 0° latitude runs almost through the middle of the continent. A large part of Africa lies in the Northern Hemisphere. It is the only continent through which the Tropic of Cancer, the Equator and the Tropic of Capricorn pass. It is bound on all sides by oceans and seas. The world’s largest hot desert, i.e. the Sahara Desert lies in this continent. The world’s longest river the Nile flows through it.
4.North America. It is the third largest continent of the world. It is linked to South America by a very narrow strip of land called the Isthmus of Panama. This continent lies completely in the Northern and Western Hemisphere.
5.South America. It lies mostly in the Southern Hemisphere. The Andes, world’s longest mountain range, runs through its length from north to south. The world’s largest river, the Amazon flows through this continent.
6. Australia. It is the smallest continent. It lies entirely in the Southern Hemisphere.
7.Antarctica.It lies completely in the Southern Hemisphere. It is a large continent. The South Pole lies almost at the centre of this continent It is permanently covered with thick ice sheets because it is located in the South Polar region. Permanent human settlement is not found here. 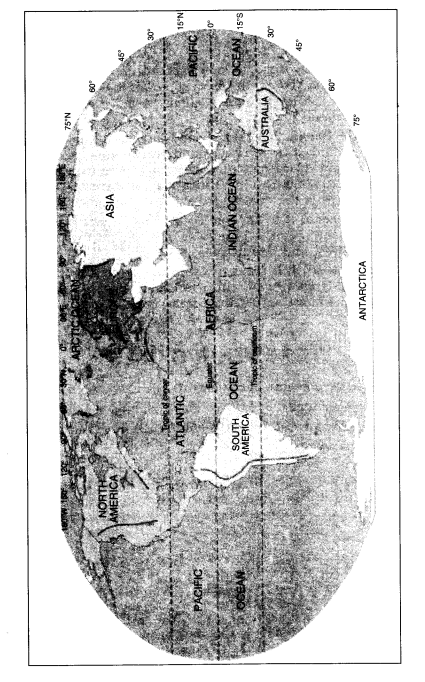 2. Write about the major oceans of the world.


Answer: There are four major oceans in the world—the Pacific Ocean the Atlantic Ocean, the Indian Ocean and the Arctic Ocean.
1.The Pacific Ocean. It is the largest ocean and is spread over one-third of the earth. Mariana Trench, the deepest part of the earth, lies under the Pacific Ocean. This ocean is circular in shape. Asia, Australia, North and South Americas surround it.
2.The Atlantic Ocean. It is the second largest ocean in the world. It is ‘S’ shaped. It is flanked by the North and South Americas on the Western side and Europe and Africa on the eastern side. The coastline of this ocean is highly indented. It is the ideal location for natural harbours and ports. Commercially, it is the busiest ocean.
3.The Indian Ocean. It is the only ocean named after country, that is, India. The shape of the ocean is triangular. It is bound by Asia in the north, by Africa in the west and by Australia in the east.
4.The Arctic Ocean. It is located within the Arctic Circle and surrounds the North Pole. It is connected with the Pacific Ocean by a narrow stretch of shallow water known as Bering Strait. See the map given in the previous question.