Notes For All Chapters Geography Class 6

Globe is a true model of the Earth.

A needle is fixed through the globe in a tilted manner, which is called its axis.

The imaginary line running on the globe divides it into equal parts. This line is known as the Equator.

All parallel circles from the Equator up to the poles are called parallels of latitude. Latitude is measured in degrees.

As we move away from the Equator, the size of the parallels of latitude decreases.

The four important parallels of latitude are :

Heat Zones of the Earth

The Globe is a true model of the earth, in a small form. A needle, called the Axis is fixed through the globe in a tilted manner.

The axis of the globe passes through two extreme points: known as the Poles (the North Pole and the South Pole). This axis is shown in the form of a needle on the globe. The real earth has no such axis.

The circle passing through the centre of the earth, and perpendicular to the axis, is called the Equator. It divides the earth into two Hemispheres, the Northern and the Southern. We can imagine a number of more circles parallel to the equator, having their centres on the axis and having different radii. These circles are called Parallels of Latitudes.

The parallels are identified with the help of degrees. The equator represents the zero degrees latitude. The latitudes in the Northern Hemisphere are designated as degrees north (°N), e.g. 10°N, 20°N, and so on till 90°N (which is the North Pole). Similarly the latitudes in the Southern Hemisphere are designated as degrees south (°S), and 90°S is the South Pole.

Degrees are further divided into minutes and minutes into seconds. Note that the symbol
for a minute is an apostrophe (‘) and that for a second is a double apostrophe (“). 60′ (60 minutes) make up a degree and 60″ (60 seconds) make up a minute. So 30’ means half a degree and 40” means two-thirds of a minute. 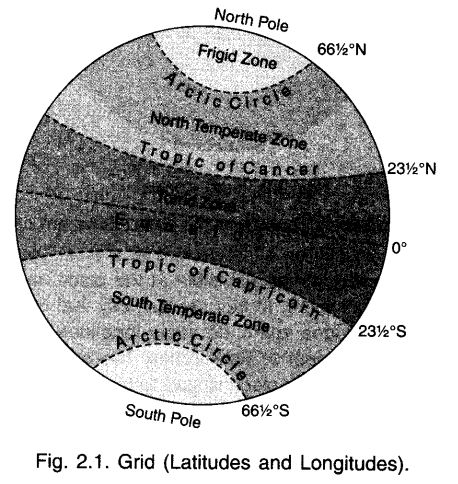 The Tropic of Cancer and the Arctic Circle are studied as special latitudes in the Northern Hemisphere. They are at 23 1/2° N and 66

The Tropic of Capricorn and the Antarctic Circle are studied as special latitudes in the Southern Hemisphere. They are at 23

The area north to the Arctic Circle and that south to the Antarctic Circle is close to the Poles and receive the sunlight of very low intensity. So it is very cold here. These regions are called the Frigid Zones. 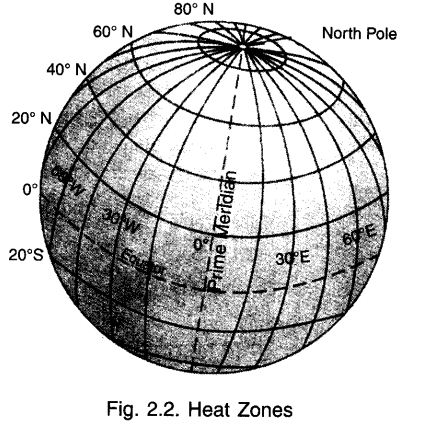 The Frigid Zones, the Temperate Zones, and the Torrid Zone are called the Heat Zones.

The sun does not shine equally on all longitudes at a time. When it is 12 noon at a time, it means that the sun is not at all visible at the place on the other side of the earth. ‘So it must be midnight there. In fact, we can say that the time difference is 24 hours at 360 degrees longitudes apart. So every longitude brings a difference of 4 minutes. This gives us the concept of Time Zones. Two consecutive time zones differ by an hour. The time at a particular place is said to be the local time.

It may happen that a certain country extends over a long range of longitudes, thus giving a large amount of time difference. E.g. Russia extends over eleven time zones. India actually extends over a range of a 2-hour time difference. But this is not too much, so for convenience and for uniformity, we have a standard meridian set at Allahabad (82° 30’), which gives the time for all over India. This time is called the Indian Standard Time (IST).

Globe: The globe is a model of the earth, as it is, but in a very small and convenient form. It shows all continents, countries, and oceans, labeled.

Axis: The imaginary line about which the earth rotates once in 24 hours is called its axis.

Poles: The two extreme points of the axis are called the Poles. One of them is the North Pole and the other is the South Pole.

Equator: The circle passing through the center of the earth, and perpendicular to the axis, is called the equator.

Prime Meridian: The circle passing through Greenwich in Britain, and perpendicular to the equator, and parallel to the axis, is called the Prime Meridian.

Latitude: One of the imaginary circles parallel to the Equator is called latitude. The latitudes have their centers on one common line and they have different radii.

Longitude: One of the imaginary circles parallel to the Prime Meridian is called longitude. The longitudes have their centers at the center of the earth and have the same radius as the Earth.

Heat Zones: Heat zones are the different zones of the earth, where the sun’s rays fall differently, thus causing different climate patterns. These zones are called the Torrid Zone, the two Temperate Zones, and the two Frigid Zones.

Greenwich: Greenwich is a place in the United Kingdom, near London, whose time is used as a standard all over the world. The Prime Meridian passes through this place, and so it is the place which divides the earth into the Eastern and the Western Hemispheres.

Standard Time: Standard time of a country or region is the time regarded as a standard for that place, despite the fact that there exists time difference geographically across that region. It is used only for convenience.