Kingdoms, Kings and an Early Republic

1. State whether true or false:
(a)‘Rajas’ who let the ‘ashvamedha’ horse pass through their lands were irwited to the sacrifice.
(b)The charioteer sprinkled sacred water on the king.
(c)Archaeologists have found palaces in the settlements of the ‘janapadas’.
(d)Pots to store grain were made out of Painted Grey Ware.
(e)Many cities in ‘mahajanapadas’ were fortified.

2.Fill in the chart given below with the terms: hunter—gatherers, farmers, traders, crafts-persons, herders.

3. Who were the groups who could not participate in the assemblies of the ‘ganas’ ?


Ans: These groups of people were not allowed to participate in the assemblies of the ‘ganas’.
(i)Women (ii) ‘Dasas’ (iii) ‘Kammakaras’.

4.Why did the ‘rajas’ of ‘mahajanapadas’ build forts?


Ans: The ‘rajas’ of ‘mahajanapadas’ built forts around their capital cities because probably the people were afraid of attacks from other kings and needed protection. It is also possible that some ‘rajas’ wanted to show that they were rich and powerful by building large, tall and impressive walls around cities. Moreover, by fortifying, the land and its people could be controlled more easily.

5. In what ways are present-day elections different from the ways in which rulers were chosen in ‘janapadas’?


Ans: Choosing rulers in ‘janapadas’—Men were chosen ‘rajas’ by performing big sacrifices. The ‘ashvamedha’ (horse sacrifice) was one such ritual which was used to identify a ‘raja’. The ‘raja’ chosen by this sacrifice was considered very powerful. Electing rulers today—Today, we have a democratic system of government. Each citizen has a right to vote and the government is decided by elections in which each citizen casts his vote.

6. Were there any ‘janapadas’ in your state ? If yes, name them. If not, name the janapadas’ that would have been the closest to your state, and mention whether they were to the east, west, north or south.


Ans: The answer depends on the region you live in. Take the help of your teacher and the map given on page 57 in the textbook to prepare your answer. However, a sample answer has been provided (using the state Uttar Pradesh) – The ‘janapadas’ in the present-day Uttar Pradesh—Panchala, Kosala.

7. Find out whether any of the groups mentioned in answer 2 pay taxes to day.


Ans: Out of the groups mentioned in answer 2, those that pay taxes even today are traders.

8. Find out whether the groups mentioned in answer 3 have voting rights at present.


Ans: Today, voting rights are not decided by gender or profession. Women, ‘khmmakaras’ and ‘dasas’—all are entitled to vote today.

Choose the correct option to complete the statements given below:
(i)The ‘ashvamedha’ was the sacrifice of
(a)horse (b) cow
(c) bull (d) goat.


(ii) Which of these groups of people were not allowed to take part in the rituals after the ‘ashvamedha’ ?
(a) ‘Vish’/’Vaishya’ (b) Priests
(c) Women (d) ‘Shudras’.


(iii)The two words that constitute the word ‘janapada’ mean:
(a) woman and foot (b) citizens and foot
(c) men and hand (d) goats and ‘rajas’.


(v) One-sixth of the produce was taken as tax from
(a) farmers (b) hunter-gatherers
(c) crafts-persons (d) Traders.

State whether these sentences are true (‘I’) or false (F).
(i)The sprinkling of sacred water on the king was done by the ‘shudras’.
(ii)The word ‘janapada’ means the land where the ’jana’ has set its foot.
(iii)Capital cities were fortified with huge walls of wood, brick or stone.
(iv) The rulers of ‘mahajanapadas’ depended on occasional gifts brought by people,
(v) The rivers Narmada and Brahmaputra flowed through Magadha.
(vi) Alexander was the only person who conquered Magadha.
(vii) Both the Buddha and Mahavira belonged to ‘ganas’ or ‘sanghas’.

Match the items in column A correctly with those given in column B,

1. Name a ritual used to recognise someone as a ‘raja’.


Ans: ‘Ashvamedha’ was one ritual used to recognise kings.

2. Which category of people was excluded from the rituals?


Ans: The ‘shudras’ were excluded from rituals,

4. How were cities fortified?


Ans: Cities were fortified by building huge walls of wood, brick or stone around them,

5. For what did rulers need taxes?


Ans. Ganga and Son were two rivers that flowed through Magadha.

7. Name some places conquered by Alexander.

8. Which rulers conquered the last of the ‘ganas’ or ‘sanghas’?


Ans: The Gupta rulers conquered the last of the ‘ganas’ or ‘sanghas’.

1. Write a short note on the ‘ashvamedha’ ritual.


Ans: The ‘ashvamedha’ (horse sacrifice) was a ritual used to recognise men as ‘rajas’. A horse was left to wander freely. If it wandered into another kingdom and the king of that kingdom stopped it, they had to fight. The ‘raja’ who succeeded in the challenge was recognised as stronger. He would then perform the sacrifice, in which other kings would also come.

2. What were the different roles of different persons in the sacrifice? [V. Imp.]


Ans: The ‘raja’ was the central person in the sacrifice. He was given a special seat, like a throne. His charioteer would tell others tales of the ‘rajas’ exploits. His wives and sons would perform several minor rituals. Other ‘rajas’ would sit and watch. Priests sprinkled sacred water on the king. Ordinary people brought gifts.

3. What is known about the ‘janapadas’ and their people?


Ans: Archaeologists have excavated a number of settlements in ‘janapadas’. They have found that people lived in huts. The people kept cattle as well as other animals. They grew a variety of crops like rice, wheat, barley, pulses, etc. They made earthen pots, some of which were grey in colour and some red.


Ans: In ‘ganas’ or ‘sanghas’, these were not one but many rulers. Even if there were several men together, each was called a ‘raja’. They performed rituals together. They met in assemblies and took decisions. Women, ‘dasas’ and ‘kammakaras’ were not allowed to participate in these assemblies.


Ans: Capital cities of ‘mahajanapadas’ were mostly fortified by building huge walls of wood, brick or stone around them. There were various reasons for building forts. They were probably built because people were afraid of attacks from other kings and needed protection. Some rulers probably built forts to make their cities impressive and to show how rich and powerful they were. Moreover, by making forts, controlling the fortified area became easier for the kings.
Buildings forts required a great-deal of planning. Hundreds of thousands of brick or stone had to be prepared. Enormous amount of labour and resources were required.

2. What changes took place in agriculture around this time? [V. Imp.]


Ans: There were two significant changes in agriculture around this time:
(i) Growing use of the iron ploughshares helped in yiedling a better grain produce. Heavy, clayey soil could be turned over better with an iron ploughshare than with a wooden ploughshare.
(ii) People began transplanting paddy. This meant that instead of scattering seed on the ground, from which plants would sprout, saplings were grown and then planted in the fields. Production developed due to this since many plants survived. 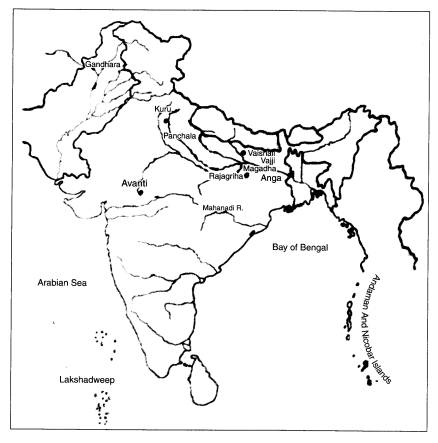