The Story of Harappa: The cities of the Indus Valley Civilisation are known as the Harappan cities. Rediscovered in the 1920s after excavations in Sindh and Punjab in present-day Pakistan, these cities flourished since 3300 BC.

The layout of the Cities:

About eighty years ago, remains of the site of a very old city called Harappa were found in present-day Pakistan. The city is supposed to be about 4700 years old. More such cities were also discovered.

These cities were usually divided into two or more parts. The part to the west was smaller but higher and the part to the east was larger but lower. The first part has been called citadel and the second part, the lower town.

The bricks used were so well made that they have survived thousands of years. The pattern of their use made walls strong.

A special tank, called the great bath, has been found in the city of Mohenjodaro. Some cities had fire altars and storehouses. 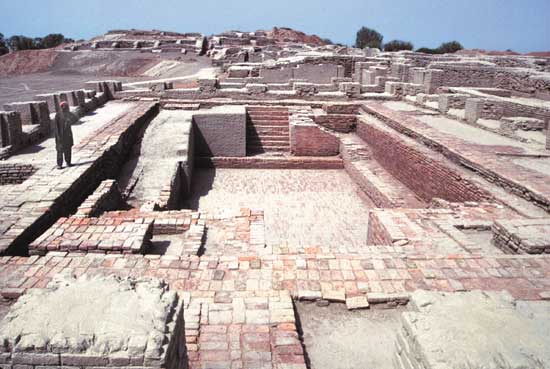 Houses were 1- or 2-stories high. Wells supplied water. Cities had covered drains.
Houses, drains and streets were planned and built at the same time. 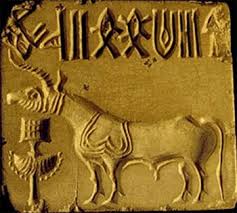 Crafts-persons made all kinds of Things Archaeologists have found things made of stone, shell and metal in addition to beads, weights and blades. Seals and pots with wonderful designs were also made. Cloth has also been found.

The Harapparts got row materials locally or from other places like Rajasthan, Oman, Iran etc.

They grew wheat, barley, pulses, peas, nee, sesame, linseed and mustard. A tool called plough was used to dig the earth Irrigation was also employed. Animals were reared by the Harappans.

In Dholavira in present-day Gujarat, a large open area for ceremonies, and stones with engravements in Harappan script have been, discovered.

A storehouse has been found in the city of Lothal.

However, there was a major change 3000 years ago and much of the Harappan cities perished. It may have been because of o- cams drying up, or deforestation, or several other reasons (see Flow-Learning 4).

Bronze: The alloy of tin and copper is called bronze.

Citadel: The part to the west of most cities was small but high in comparison to the eastern part. This part is called the citadel.

Crafts-Persons: Men and women who made all kinds of things-either in their own homes or in special workshops were the crafts-persons.

Lower Town: The eastern part of the cities is referred to as the lower town.

Plough: A new tool in the Harappan cities which was used to dig the earth for turning soil and planting seeds was the plough.

Raw materials: Substances that are either found naturally or produced by farmers/ herders are called raw materials: Raw materials are used to manufacture other materials.

Rulers: People who planned the construction of special buildings in the city were the rulers.

Scribes: People who knew how to write were the scribes.