The Sangha: Both Mahavira and Buddha felt that only those who gave up worldly life and became monks could gain true knowledge. They set up organisations called Sanghas where these monks spent much of their time on religious studies and meditation.

Monasteries: fain and Buddhist monks went from place to place, and therefore, the need for more permanent shelters was felt. As a result, monasteries were built, which were known as Viharas.

Four Ashramas: In Upanishadic times, the life of an upper-caste man was divided into four stages called Ashramas. These were Brahmacharya, Grihastha, Vanaprastha and Sanyasa. Brahmin, Kshatriya and Vaishya men were expected to lead their lives according to them, but this was not followed rigidly.

Teachings of Mahavira: Mahavira believed that a person’s position in life depends on the karma of his previous life. He preached ahimsa. He instructed his followers not to lie, steal or kill. His followers were known as ‘Jains’, who led simple lives and begged for food.

Buddha: Gautama (Siddhartha), the founder of Buddhism, was born at Lumbini about 2500 years ago. During those days, certain changes took place in the society of the Mahajanapadas. Dissatisfied with such changes, many thinkers gave up worldly life, went to forests for meditation and Buddha sought the true meaning of life.

Buddha’s Enlightenment: He left home at the age of 30 and attained enlightenment under a ‘peepal tree’ at Bodh Gaya in Bihar. Buddha delivered his first sermon at Sarnath. He preached in Prakrit, the language spoken by the common people.

Jainism: Jainism was founded by Vardhamana Mahavira of the Vajji Gana-sangha. He left home at the age of 30 and went to live in the forest. For many years, he led a hard and lonely life but finally attained enlightenment.

Siddhartha (Gautama), who founded Buddhism, was born about, 2500 years ago. He belonged to a ‘gana’ called the Sakya ‘gana’.

He left his home in search of knowledge. He meditated and got enlightened in Bodh Gaya in Bihar. He preached for the first time in Sarnath. He preached of sufferings and unhappiness in life. He taught in the language of the ordinary people, Prakrit.

Other thinkers also wanted to know about life after death and about sacrifices. Their ideas were recorded in the Upanishads, part of the later Vedic texts.

Gargi was a woman thinker. Satyakama Jabala was a slave thinker.

The founder of Jainism was Vardhamana Mahavira. He was in the Vajji ‘sangha’. He also led a life similar to that of Buddha. He said that those who wish to know the truth must leave their homes. He spoke of ‘ahimsa’. He taught in Prakrit

Jainas had to lead very simple lives, begging for food, being honest and men had to shed their clothes. The Jainism teachings were written for the first time about 1500 years ago.

The rules for the Buddhist ‘Sangha’ were written down in a book called the Vinaya Pitaka.

Monks of Buddhism and Jainism started living in monasteries known at ‘Viharas’. The earliest ‘Viharas’ were made of wood and then brick. 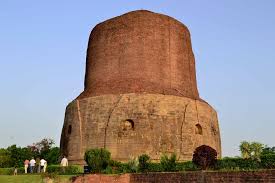 Ahimsa: The Jain rule of ‘ahimsa’ means not hurting or killing living beings. According to Mahavira, each living being “longs to live”.

Atman: The individual soul which remains permanent in the universe even after we die was called ‘atman’ by the thinkers.

Buddhism: The religion founded by the Buddha (Gautama/Siddhartha) was Buddhism.

Jainism: The religion founded by Vardhamana Mahavira is called Jainism.

Karma: Our actions have been referred to by Buddha as ‘Karma’. Buddha said our ‘Karma’ – good or bad – affect us both in this life and the next life.

Tanha: The desire for more things have been described by the Buddha as thirst or ‘tanha’.

Upanishads: The Upanishads were part of the later Vedic texts. The word literally means ‘approaching and sitting near’.

Viharas: The monasteries where monks lives were called ‘Viharas’.