Burial Spots of Families: Some burial chambers have more than one skeleton, probably meaning that one chamber was used for many members of the same family. A hole in the wall allowed the chamber to be used over and over again. The burial sites were marked by stones.

Battles: Rig Veda tells us about battles fought for land and cattle. People met in assemblies and discussed war and peace. Wealth obtained thereafter was distributed amongst the leaders, priests and people.

Vedas: Initially, the Rigveda was not in written form, but was passed on orally. Knowledge passed on in this way is known as ‘Shruti’. The Vedic teachers took great care to teach students to pronounce words and memorise hymns correctly.

Sanskrit and Other Languages: Scholars have discovered many similarities between Sanskrit and European languages such as Latin, English and German. Historians came to the conclusion that Sanskrit belongs to the Indo-European group of languages. Other languages like Hindi, Kashmiri, Sindhi, etc. also belong to the same group.

Skeleton Studies: Study of the bone structure helps to differentiate between male and female skeletons. The hip or the pelvic area of a woman is generally larger than a man.

Special Burial at Inamgaon: We find burials dated back to 3600 and 2700 years ago. Adults were generally buried in the ground. Special mention may be made of a man who was found buried in a large, four-legged clay jar in the courtyard of a five-roomed house.

Writing Evidence: First evidence of writing in China was found 3500 years ago. These writings were on animal bones and were called oracle bones. However, the Chinese did not know the use of iron.

Other languages: Tamil, Telugu, Kannada and Malayalam belong to the Dravidian family and the languages spoken in Jharkhand and parts of Central India belong to the Austro-Asiatic family.

Megaliths: These literally mean big stones, which were used by early men to spot burial sites.

There are four Vedas:

The oldest one is the Rigveda (3500 years ago). It contains over a thousand hymns (“Suktas”). The Vedas are religious texts of Hinduism. The hymns were composed by rishis and students memorised them. The Rigveda has been written in old (Vedic) Sanskrit.

The Vedas were written down much later. Students learnt the hymns and passed it on to other generations by memorising and not writing. 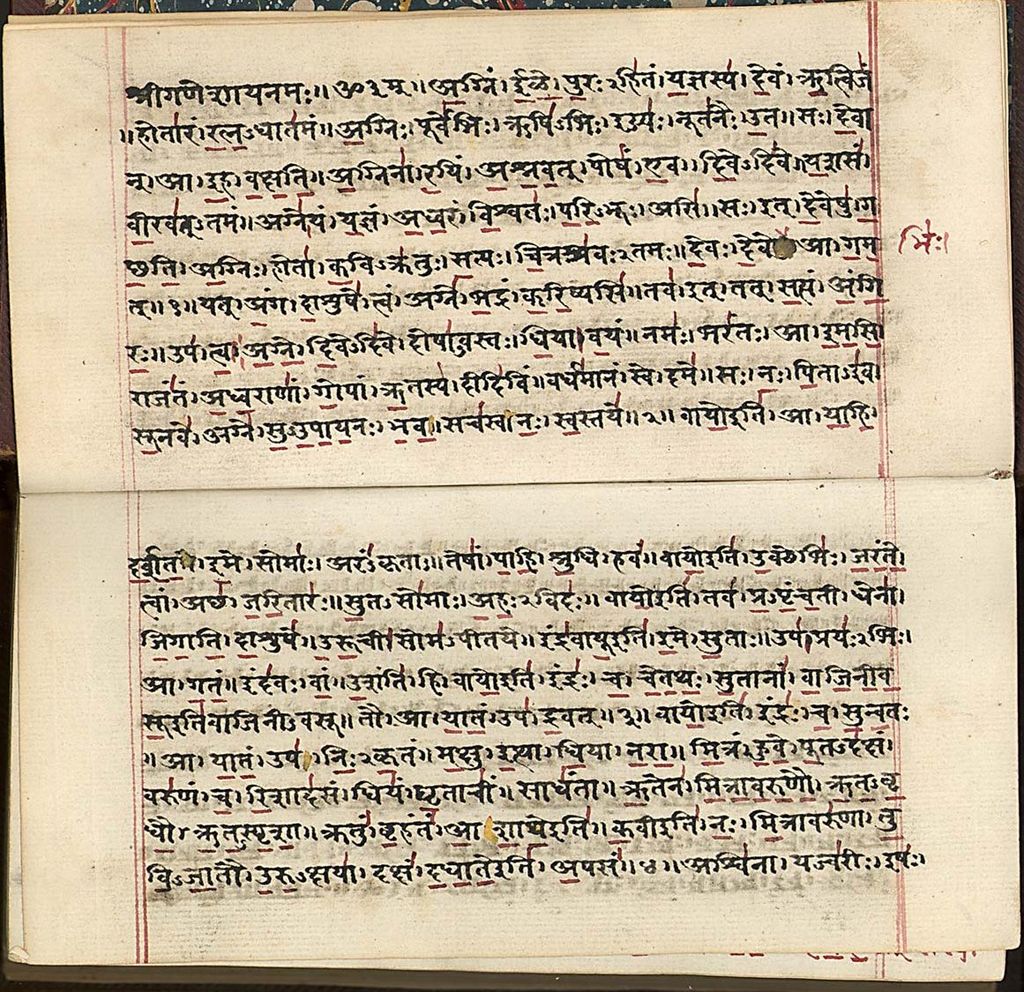 The Manuscript of rigveda

Rigveda contains prayers for cattle, children and horsesf Wealth was distributed among the leaders, priests and other people, according to the Rigveda. ‘Yajnas’ were performed. Most men took part in wars.

The Rigveda divides people in two groups on the basis of their work : the ‘brahmins’ and the ‘rajas’. People or the community as a whole have been referred to as ‘jana’ or ‘vish’. The composers of hymns called themselves ‘Aryas’, and their opponents ‘Dasas’/ ‘Dasyus’.

Stone boulders as the one in figure are called Megaliths. 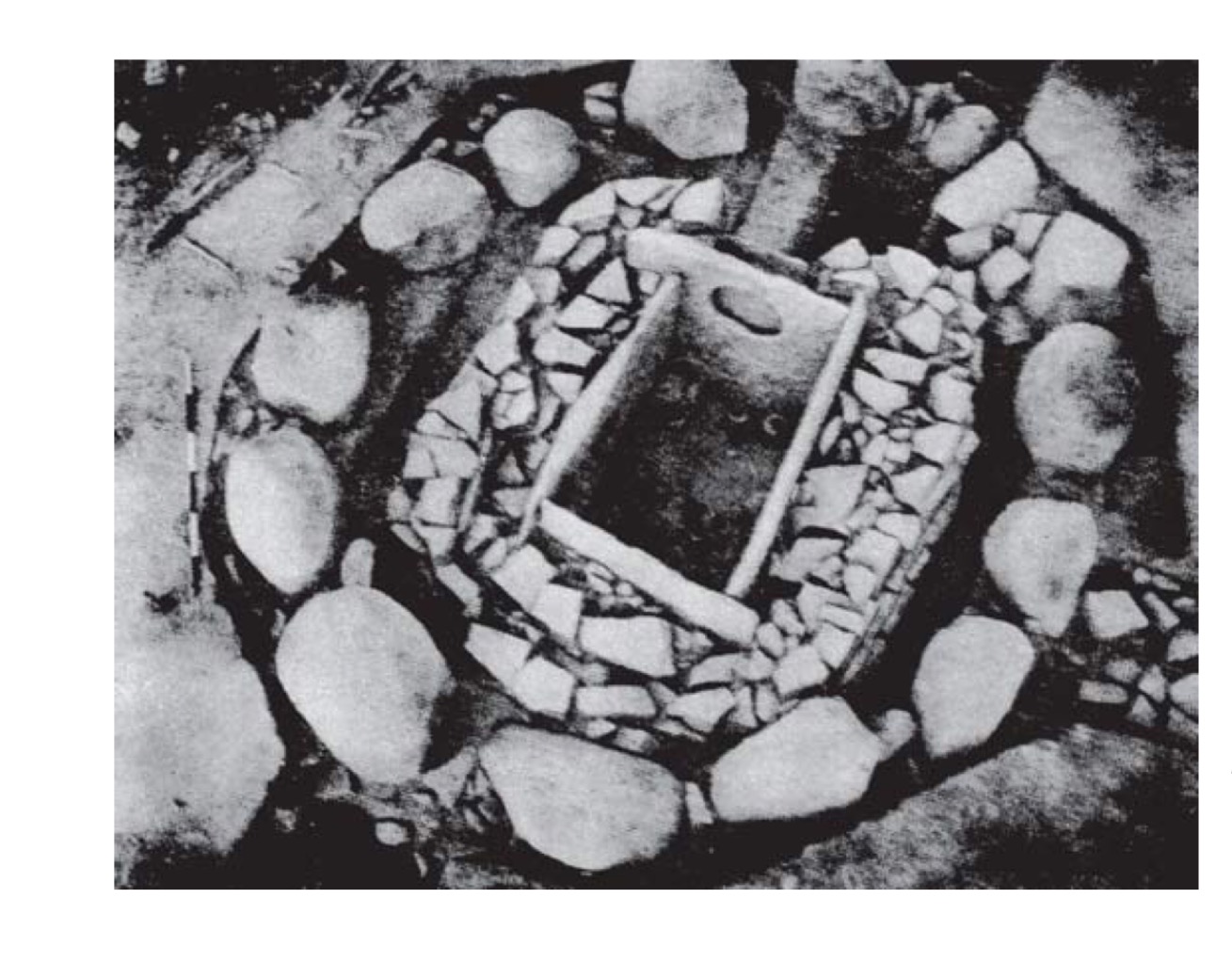 They were used to mark burial sites. This practice was used in the Deccan and Kashmir. Some megaliths are on the surface and some are underground.

The dead were buried with distinctive pots, which are called Black and Red Ware.

People were buried along with several objects. The objects were chosen probably depended upon the status of the person dead.

Families were usually buried together.

In Inamgaon, people were buried with their head towards the north. Vessels containing food and water were placed with them.

Aryas: The people who composed the hymns used the word ‘Aryas’ for themselves.

Black and Red-Ware: The two distinctive pots, with which the dead were buried, have been called the Black and the Red Ware.

Brahmins: The priests were referred to as the ‘Brahmins’. They performed various rituals.

Dasyus/Dasas: The opponents of the ‘Aryas’ were referred to as ‘Dasas’/’Dasyus’ by them. This world later meant ‘slave’.

Megalith: A stone boulder, used to mark burial site, is referred to as a megalith.

Sukta: The hymns of the Vedas were called ‘Suktas’, which translates into ‘well-said’.

About 3600 years ago – beginning of the settlement of Inamgaon.