Notes For All Chapters Geography Class 8

Resources: Anything that has some utility to satisfy our needs is known as a resource.

Human beings are important resources because their ideas, knowledge and skills lead to the creation of new resources.

Types of Resources: There are three types of resources—Natural resources, Man-made resources and Human resources.

Natural Resources: The resources which are drawn from nature and used without much modification are known as natural resources.

On the basis of their distribution, resources are classified as Ubiquitous resources and Localised resources.

Actual Resources: Actual resources are those resources whose quantity is known. Rich deposits of coal in Ruhr region of Germany, dark soils of Deccan Plateau in Maharashtra.

Ubiquitous and Localised Resources: Resources that are found everywhere, like the air we breathe, are ubiquitous resources. But those, which are found only in certain places, are localized resources, like copper and iron ore.

Renewable Resources: Renewable resources are those which get renewed or replenished quickly, e.g. solar and wind energy.

Non-renewable Resources: Those resources which are present in limited stock and once exhausted may take thousands of years to renew, e.g. Coal and Petrol.

We have to conserve the resources, otherwise, non-renewable resources will get exhausted and people will face a shortage of food and shelter.

Any substance, living being or service that has utility (i.e. can help us in any possible way) is said to be a resource.

A resource has some value. The value can be associated with money (i.e. you have to pay money to get it), or just mental satisfaction (e.g. when you look at a beautiful painting or scenery, it feels pleasant, so the painting or scenery has utility).

Examples of resources include books, stationery material, clothes, utensils, furniture, your teacher, school, rivers, water, electricity, and so on.

The economic value of a resource may change with time.

A substance may or may not be a resource depending on our knowledge. If we do not know how to write with a pen, then certainly the pen has no utility for us. So, in this case, the pen is not a resource. However, for those who know how to use a pen, it is a resource. So technology, ideas, knowledge, inventions, discoveries, etc. make a substance a resource.

Time may also be a factor involved in making a substance a resource. Water has always been there, but its utility to manufacture electricity was not always known.
When people realized that water can be used to produce electricity, water became a resource in a new way.

Resources may be natural, human, or human-made.

Natural resources are those that are taken from nature. They are used without modifying them, i.e. in the same form as they exist in. Rivers, lakes, air, soils, minerals, trees, mountains, etc. are natural resources.

On the basis of level of development of resource, a natural resource can be actual or potential. An actual resource is one which is used currently. We know their quantity. Examples are: coal deposits. A potential resource is one whose utility is not known at present or is not used despite having utility; instead it may be useful at some time in future. It means that it has the potential to have utility, although it does not have any today. Examples include uranium deposits in Ladakh.

Natural resources may also be classified as renewable and non-renewable. A renewable resource can be used without any risk of its ending up. They exist in unlimited quantity, for example solar energy, and wind energy. On the other hand, use of non-renewable resources need to be controlled since once they end up, they cannot be renewed. Examples: coal, petroleum.

On the basis of distribution, a resource can be ubiquitous or localised. A ubiquitous^ resource is found everywhere, like air. A localised resource is, however, found in certain parts of the world only, like we cannot find coal everywhere.

Human-made resources have not been provided to us by nature. Human beings have used their intelligence to manufacture them for their own use. Examples include vehicles, buildings, roads, telephone, etc.

Human resources include people who serve us in any way. Your teacher, doctor, carpenter, cobbler, etc. are human resources.

Human resource development refers to the improvement of people’s skills so that they become more useful than before and are a better resource.

Resource conservation is the concept of using resources carefully so that they do not end up quickly. The future generations also need the resources, but if we keep using them at a fast pace, they may end up, thus posing problems for the future. We should use resources in such a balanced way that we satisfy our needs as well as conserve them for the future. This concept is called sustainable development.

We can contribute to sustainable development by switching off lights when not needed, by recycling things and using them again, and in many more ways. 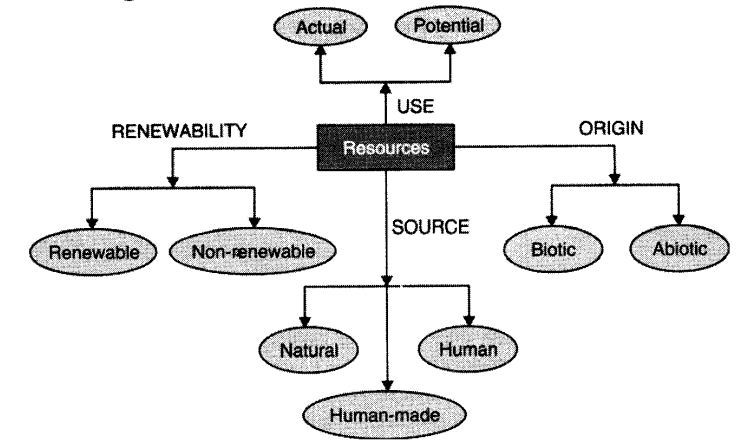 Utility: A substance has utility if it can be used in any possible way to satisfy our needs.

Value: Worth of a substance assessed on the basis of utility.

Patent: It applies to the exclusive right over an idea or invention.

Resource: Any substance having utility in any way is a resource.

Technology: The application of the latest knowledge and skills in doing or making things is called technology.

Natural Resource: Natural resources are those that are taken from nature.

Actual Resource: An actual resource is one which is used currently and whose quantity is known.

Potential Resource: A potential resource is one whose utility is not known at present or is not used despite having

Utility: instead it may be useful at some time in the future.

Abiotic Resource: An abiotic resource is a non-living resource.

Renewable Resource: A renewable resource can be used without any risk of its ending up because they exist in unlimited quantity.

Non-renewable Resource: A non-renewable resource is one which is present in limited quantity.

Ubiquitous Resource: A ubiquitous resource is one that is found everywhere.

Localized Resource: A resource that is found only in certain parts of the world and not everywhere.

Human Resources: A human being who can contribute to his family, society, or economy is called a. human resource.

Human Resource Development: Human resource development refers to the improvement of people’s skills so that they become more useful than before and are a better resource.

The stock of Resource: The amount of resource, available for use is called it’s stock.

Resource Conservation: Resource conservation is the concept of using resources carefully so that they do not end up quickly.

Sustainable Development: It is the concept of using resources in a balanced way so that our purpose is solved, as well as they are also conserved for the future.