How, When and Where

Solutions For All Chapters History Class 8

Question.1.
State whether true or false:
(a) James Mill divided Indian history into three periods – Hindu, Muslim, Christian.
(b) Official documents help us understand what the people of the country think.
(c) The British thought surveys were important for effective administration.

Question.2.
What is the problem with the periodisation of Indian history that James Mill offers?

James Mill divided Indian history into three periods – Hindu, Muslim and British. This periodisation has its own problem. It is difficult to refer to any period of history as ‘Hindu’ or ‘Muslim’ because a variety of faiths existed simultaneously in these periods. It is also not justified to characterise an age through the religion of the rulers of the time. What it suggests is that the lives and practices of others do not really matter. It is worth-mentioning that even rulers in ancient India did not all share the same faith.

Question.3.
Why did the British preserve official documents?

The British believed that by preserving official documents, it would be easier for them or any other persons to know about the decisions taken in the past. One can study the notes and reports that were prepared in the past. Their copies may be prepared and used in present time if needed so.

Question.4.
How will the information historians get from old newspapers be different from that found in police reports?


Answer: The information printed in newspaper are usually affected by the views and opinions of the reporters, news editors etc. But what historians find in police reports are usually true and realistic.

Question.5.
Can you think of examples of surveys in your world today? Think about how toy companies get information about what young people enjoy playing with or how the government finds out about the number of young people in school. What can a historian derive from such surveys?

Question.2.
Fill in the blanks with appropriate words to complete each sentence.
(i) The colonial government gave much importance to the practice of
(ii) Historians have usually divided Indian history into ancient, and
(iii) A History of British India is a massive work.
(iv) Mill thought that all Asian societies were at a level of civilisation than Europe.
(v) The British established specialised institutions like and to preserve important documents.

Question.3.
State whether each of the following statements is True or False.
(i) The British were very particular about preserving official documents.
(ii) Printing began to spread by the middle of the 20th century.
(iii) The periodisation of Indian history offered by James Mill was not at all accepted.
(iv) The British carried out detailed surveys by the early 19th century in order to map the entire country.
(v) James Mill glorified India and its culture in his book A History of British India. 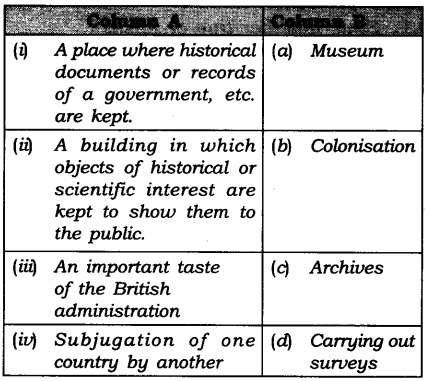 Question 1.
Name the events for which specific dates can be determined.

Question 2.
What was an important aspect of the histories written by the British historians in India?

The rule of each Governor-General was an important aspect.

Question 3.
Who was James Mill?

He was a Scottish economist and political philosopher and is known for his book A History of British India.

Question 4.
What was Mill’s opinion about the Asian societies?

In Mill’s opinion all Asian societies were at a lower level of civilisation than Europe.

Question 5.
What evil practices, according to James Mill, dominated the Indian social life before the British came to India?

According to James Mill, the evil practices that dominated to the Indian social life were religious intolerance, caste taboos and superstitious practices.

Question 7.
Why do many historians refer to modem period as colonial?

It is because, under British rule people did not have equality, freedom or liberty—the symbols of modernity.

Question 8.
Mention one important source used by historians in writing about the last 230 years of Indian history.

The official records of the British administration.

Question 9.
What is done under census?

It records the number of people living all the provinces of India and gathers information on castes, religions and occupation.

Question 10 .
What do official records not tell?

Official records do not tell what other people in the country felt, and what lay behind their actions.

Question 11.
Why do we try and divide history into different periods?

We do so in order to capture the characteristics of a time, its central features as they appear to us.

James Mill did not cherish any positive idea about India. He was of the opinion that all Asian societies were at a lower level of civilisation than Europe. According to his telling of history, before the British came to India, the Hindu and the Muslim despots ruled the country. Religious intolerance, caste taboos and superstitious practices dominated social life. He felt that only British rule could civilise India. He suggested that the British should conquer all the territories of India to ensure the enlightenment and happiness of the Indian people. For India was not capable of progress without the help of the British.

Question 2.
Historians divide Indian history into ancient, medieval and modem. But this division too has its problems. What are these problems?

This periodisation has been borrowed from the West where the modem period was associated with the growth of dll the forces of modernity such as science, reason, democracy, liberty and equality. Medieval was a term used to describe a society where these features of modem society did not exist.
It is difficult for us to accept this characterisation of the modem period. Here, it is worth-mentioning that Indians did not have equality, freedom or liberty under the British rule. The country also lacked economic growth and progress in that period. It is therefore many historians refer to modem period as colonial period.

Question 3.
What did the British do to preserve important official documents and letters?

The British felt the need to preserve all the important official documents and letters. For this, they set up record rooms attached to all administrative institutions. The village tahsildar’s office, the collectorate, the commissioner’s office, the provincial secretariats, the lawcourts – all had their record rooms. The British also established specialised institutions such as archives and museums to preserve important records.

Question.4.
What do official records not tell? How do we come to know about them?

Official records do not always help us understand what other people in the country felt, and what lay behind their actions. For that we have diaries of people, accounts of pilgrims and travellers, autobiographies of important personalities, and popular books, etc. that were sold in the local bazaars. With the spread of printing press, newspapers came to be published and issues began to be debated in public. Leaders and reformers wrote.to spread their ideas, poets and novelists wrote to express their feelings.

Question.5.
How did the British conquer India and establish their rule?


Answer: The British conquered India in the following ways:

1. They subjugated local nawabs and rajas.
2. They established control over the economy and society collected revenue to meet all their expenses, bought goods they wanted at lower prices and produced crops they needed for export.
3. They brought changes in rulers and tastes, customs and practices.
4. Thus, they moulded everything in their favour and subjugated the country very soon.

Question. 1.
How do the official records of the British administration help historians to write about the last 250 years of Indian history?

The British believed that the act of writing was important. Hence, they got written up every instruction, plan, policy decision, agreement, investigation, etc. They thought that once this was done, things could be properly studied and debated. This conviction produced an administrative culture of mtemos, notings and reports.
The British were very interested in preserving all important documents and letters. For this, they established record rooms attached to all administrative institutions such as the village tahsildar’s office, the collectorate, law courts etc. They also set up archives and museums to preserve important records.
Letters and memos that moved from one branch of the administration to smother in the early years of the 19th century can still be read in the archives. Historians can also take help from the notes and reports that district officials prepared or the instructions and directives that were sent by officials at the top to the provincial administrators.

Question.2.
How did surveys become important under the colonial administration?

The British gave much importance to the practice of surveying because they believed that a country had to be properly known before it could be effectively administred. Therefore, they carried out detailed surveys by the early 19 th century in order to map the entire country:

1. They conducted revenue surveys in villages.
2. They made efforts to know the topography, the soil quality, the flora, the fauna, the local histories and the cropping pattern.
3. They also introduced census operations, held at the interval of every ten years from the end of the 19th century. They prepared detailed records of the number of people in all the provinces of India, noting information on castes, religions and occupation separately.
4. The British also carried on several other surveys such as botanical surveys, zoological surveys, archeolo¬gical surveys, forest surveys, etc. In this way, they gathered all the facts that were essential for administering a country.