Question 1.
Select the correct word from the following list and fill in the blanks.
float, water, crop, nutrients, preparation
(a) The same kind of plants grown and cultivated on a large scale at a place is called _____
(b) The first step before growing crops is _______ of the soil.
(c) Damaged seeds would ______ on top of the water.
(d) For growing a crop, sufficient sunlight and ______ and ______ from the soil are essential.

Question 2.
Match items in column A with those in column B.

Question 3.
Give two examples of each.
(a) Kharif crop
(b) Rabi crop

Answer:
(a) Kharif crop: Paddy and maize
(b) Rabi crop: Wheat and gram

Question 4.
Write a paragraph in your own words on each of the following.
(a) Preparation of soil
(b) Sowing
(c) Weeding
(d) Threshing

Answer:
(a) Preparation of soil: Soil preparation is necessary before growing a crop. It involves tilling and loosening the soil. This allows the roots to penetrate deep in the soil and to breath easily even when they are deep.

(b) Sowing: The process of putting seeds into the soil is called sowing. The tool used traditionally for sowing seeds is funnel-shaped. Nowadays a seed drill is used for sowing with the help of tractors. This tool sows the seed uniformly at a proper distance and depth.

(d) Threshing: The process of separating the grain seeds from the chaff is called threshing.

Question 5.
Explain how fertilisers are different from manure.

Question 6.
What is irrigation? Describe two methods of irrigation which conserve water.

Answer:
The artificial method of watering the plants for assisting in their growth is called irrigation. Main sources of irrigation are wells, tube-wells, ponds, lakes, rivers.
Two methods which help us to conserve water are:
(i) Sprinkler irrigation system: This irrigation system has an arrangement of vertical pipes with rotating nozzles on the top. It is more useful in the uneven and sandy land where sufficient water is not available.

(ii) Drip irrigation system: This irrigation system has an arrangement of pipes or tubes with very small holes in them to water plants drop by drop just at the base of the root. It is very efficient as water is not wasted at all.

Question 7.
If wheat is sown in the kharif season, what would happen? Discuss.

Answer:
Wheat crop is sown from November/December to March/April. It is grown in winter and requires less water. If wheat is sown in Kharif season, its production will be decreased considerably.

Question 8.
Explain how soil gets affected by the continuous plantation of crops in a field.

Answer:
Continuous plantation of crops makes the soil poorer in certain nutrients as the crops take up nutrients from the soil. The soil becomes infertile. It does not get enough time to replenish the nutrients.

Question 9.
What are the weeds? How can we control them?

Answer:
The undesirable and unwanted plants which grow naturally along with the crop are called weeds. The growth of weeds can be controlled by adopting many ways. Tilling before sowing of crops helps in the uprooting and killing of weeds, which may then dry up and get mixed with the soil. Weeds are also controlled by using certain chemicals, called weedicides. Weedicides are sprayed in the fields to kill the weeds.

Question 10.
Arrange the following boxes in the proper order to make a flow chart of sugarcane crop production

Question 11.
Complete the following word puzzle with the help of clues given below.
Down
1. Providing water to the crops.
2. Keeping crop grains for a long time under proper conditions.
5. Certain plants of the same kind grown on a large scale.
Across
3. A machine used for cutting the matured crop.
4. A rabi crop that is also one of the pulses.
6. A process of separating the grain from the chaff. 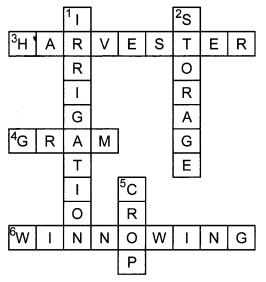