Stars and The Solar System

Choose the correct answer in Questions 1-3.
Question 1.
Which of the following is NOT a member of the solar system?
(a) An asteroid
(b) A satellite
(c) A constellation
(d) A comet

Question 2.
Which of the following is NOT a planet of the sun?
(a) Sirius
(b) Mercury
(c) Saturn
(d) Earth

Answer: (a) we can see only that part of the moon which reflects light towards us.

Question 7.
In which part of the sky can you find Venus if it is visible as an evening star?

Answer: In west side of the sky.

Question 8.
Name the largest planet of the solar system.

Answer:
A group of stars which has a recognizable shape is called a constellation.
Example: Ursa Major, Orion

Question 10.
Draw sketches to show the relative positions of prominent stars in
(i) Ursa Major and
(ii) Orion 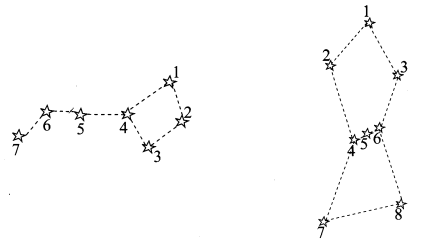 Question 11.
Name two objects other than planets which are members of the solar system.

Question 12.
Explain how you can locate the Pole star with the help of Ursa Major.

Answer:
Pole star can be located with the help of two stars at the end of Ursa Major. Imagine a straight line passing through these stars. Extend the imaginary line in North direction. This line is about five times the distance between two stars. A star is seen in this direction which is called Pole star.

Question 13.
Do all the stars in the sky move? Explain.

Question 14.
Why is the distance between stars expressed in light years? What do you understand by the statement that a star is eight light years away from the Earth?

Answer:
The stars are very far away from the Earth and it is not convenient to express such distances in kilo¬metres. Thus, such large distances are expressed in unit known as light year.
If we say that a star is eight light years away from Earth, it means that the light from star will reach the Earth in eight years.

Answer:Let the radius of Earth be r units. 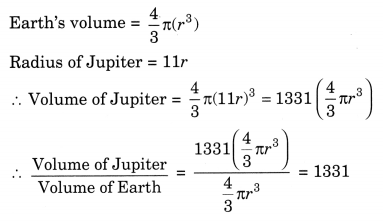 Question 16.
Boojho made the following sketch (Fig. 17.6) of the solar system. Is the sketch correct or not, correct it. 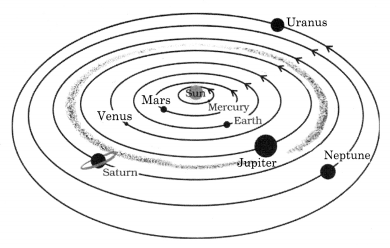 Answer: No, the sketch made by Boojho is not correct. The correct sketch is given below: 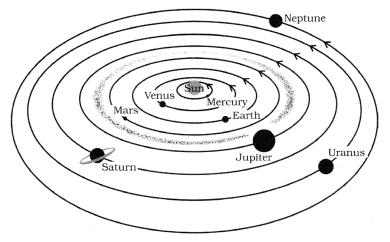