Question 1.
What are the advantages of using CNG and LPG as fuels?

Answer:
The advantages of using CNG and LPG as fuels are:
1. They burn with a smokeless flame and so does not cause any pollution.
2. They leave no ash on burning.
3. They are easy to handle and convenient to store.

Question 2.
Name the petroleum product used for surfacing of roads.

Question 3.
Describe how coal is formed from dead vegetation. What is this process called?

Answer:
Millions of years ago, trees, plants, ferns and forests got buried below the rocks, soil and sand due to natural processes like flooding, earthquake, etc. Slowly, as more soil deposited over them, they were compressed. This led to the conditions of high pressure and heat. These conditions along with the anaerobic conditions turned the carbon-enriched organic matter of wood into coal.
This slow process of conversion of wood into coal is called carbonisation.

Question 5.
Tick True/False against the following statements.
(a) Fossil fuels can be made in the laboratory.
(b) CNG is more polluting fuel than petrol.
(c) Coke is an almost pure form of carbon.
(d) Coal tar is a mixture of various substances.
(e) Kerosene is not a fossil fuel.

Answer:
Fossil fuels take millions of years to be formed. They are limited in nature and cannot be replenished easily, once consumed. Hence, they are considered as exhaustible natural resources.

Question 7.
Describe the characteristics and uses of coke.

Answer:
Characteristics of coke: Coke is 98% pure carbon. It is a tough, porous and black substance. It pro-duces a very little smoke.
Uses of coke: Coke is very useful as fuel. It is a good reducing agent. It is widely used in metallurgical processes to reduce metals from their oxides. It is used for producing water gas.

Question 8.
Explain the process of the formation of petroleum.

Answer:
Petroleum is formed by the burial of aquatic plants and animals below the sea bed. The marine animals and plants died thousands of years ago and settled down in the bottom of sea. In anaerobic conditions, microorganisms decompose this organic matter. Due to high pressure and heat, the dead remains of tiny plants and animals were slowly converted into petroleum.

Question 9.
The following table shows the total power shortage in India from 2004-2010. Show the data in the form of a graph. Piet shortage percentage for the years on the y-axis and the year on the x-axis. 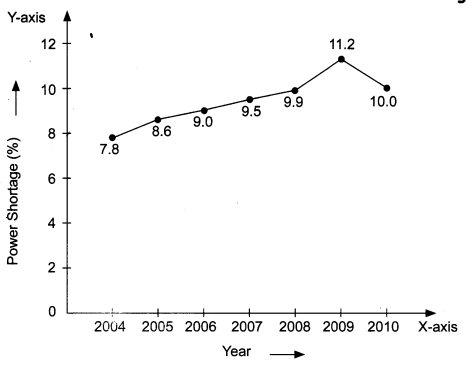