Question 1.
List conditions under which combustion can take place.

Answer:
Combustion can take place in the presence of:
(a) a combustible substance.
(b) oxygen, that is, the supporter of combustion.
(c) attainment of ignition temperature of the substance.

Question 3.
Explain how the use of CNG in automobiles has reduced pollution in our cities.

Answer:
The use of CNG in automobiles has reduced pollution in our cities as it is a quality fuel and has some benefits:
(a) It gives out less carbon dioxide gas, carbon monoxide gas, sulphur dioxide and nitrogen dioxide, which is beneficial as they play crucial role in global warming and acid rain.
(b) It leaves behind no residue after its combustion.

Question 5.
Give reasons.
(a) Water is not used to control fires involving electrical equipment.
(b) LPG is a better domestic fuel than wood.
(c) Paper by itself catches fire easily whereas a piece of paper wrapped around an aluminium pipe does not.

Answer:
(a) Since water is a good conductor of electricity, it may result in electric shocks to the person trying to extinguish fire.
(b) LPG is better domestic fuel than wood because it does not produce gases, nor does it leave any residue behind. Moreover, it has more calorific value than wood.
(c) As its ignition temperature is low, the paper by itself catches fire easily. But a piece of paper wrapped around an aluminium pipe does not catch fire easily, as the heat being given gets absorbed by the aluminium pipe and the piece of paper does not get its ignition temperature.

Question 6.
Make a labelled diagram of a candle flame. 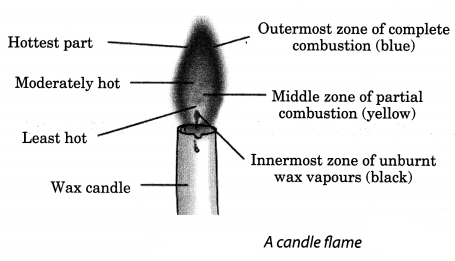 Question 7.
Name the unit in which the calorific value of a fuel is expressed.

Answer:
The unit in which the calorific value of a fuel is expressed is kilojoules per kilogram (kJ/kg).

Question 8.
Explain how CO2 is able to control fires.

Answer:
As CO2 is heavier than oxygen, it forms a blanket around fire, because of which the supply of air is stopped. Men over, it brings down the temperature of the burning substance. In these ways, it plays a significant role in controlling fire.

Question 9.
It is difficult to burn a heap of green leaves but dry leaves catch fire easily. Explain.

Question 10.
Which zone of a flame does a goldsmith use for melting gold and silver and why?

Answer:
A goldsmith uses the outermost zone of a flame, which is non-luminous, to melt gold and silver as it is the hottest zone of the flame, having more temperature.

Question 11.
In an experiment, 4.5 kg of a fuel was completely burnt. The heat produced was measured to be 180,000 kJ. Calculate the calorific value of the fuel.

Answer:
Calorific value of a fuel =

Question 12.
Can the process of rusting be called combustion? Discuss.

Answer:
The water which was put by Ramesh will get heated in a shorter time; because he had put it nearer to the hottest zone of the flame.