1. Alcohols and phenols may be classified as monohydric, dihydric, trihydric or polyhydric according to number of hydroxyl groups they contain one, two, three or many respectively in their molecules.
2. Primary (1°), secondary (2°) and tertiary (3°) alcohols are those in which as the OH group is attached to a primary, secondary and tertiary carbon atoms respectively.
3. Ethers are classified as simple or symmetrical ethers if the alkyl or aryl groups attached to the oxygen atom are same, and mixed or unsymmetrical ethers if the two groups are different.
4. Preparation of Alcohols
(a) From alkenes:
(i) By acid catalyzed hydration: The addition reaction takes place in accordance with Markovnikov’s rule.
(ii) By hydroboration-oxidation
(b) From carbonyl compounds
(i) By reduction of aldehydes and ketones: On reduction, aldehydes give 1° alcohols and ketones give 2° alcohols.
(ii) By reduction of carboxylic acids and esters
(iii) From Grignard reagents
5. Phenols may be prepared by substitution of halogen in
(a) Haloarenes
(b) Sulphonic acid group in benzene sulphonic acid
(c) From hydrolysis of diazonium salts
(d) Industrially from Cumene:
6. Chemical reactions of alcohols and phenols:
(a) Reactions involving the cleavage of the  O-H bond: 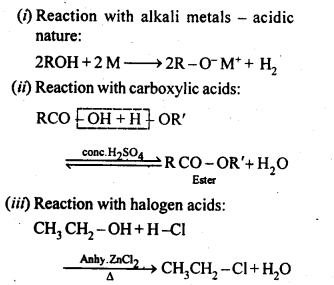 (b) Reactions involving the alcohol as a whole. 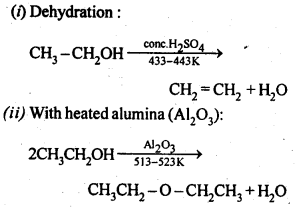 7. Reactions of phenols :
(a) Electrophilic substitution reaction: The presence of -OH group in phenols activates the aromatic ring towards electrophilic substitution and directs the incoming group to the ortho and para positions due to resonance effect.
(b) Kolbe’s reaction: In this reaction sodium phenoxide is treated with C02 at 400K under 3-7 atm pressure, sodium salicylate is formed which is acidified to get salicylic acid.
(c) Reimer-Tiemann reaction: In this reaction phenol reacts with chloroform in presence of NaOH and produce salicyldehyde.
8. Preparation of Ethers:

9. Physical Properties:
(a) Boiling point of ethers are much lower than corresponding alcohols because ethers do not form intermolecular H-bonding.
(b) Slightly soluble in water.
10. Chemical properties:
(a) Cleavage ofC-O bond in ethers:

(b) Electrophilic substitution: In this, the alkoxy group activates the aromatic ring and directs the incoming group to ortho and para positions.