Types of Relation
Empty Relation: A relation R in a set X, is called an empty relation, if no element of X is related to any element of X,
i.e. R = Φ ⊂ X × X

Universal Relation: A relation R in a set X, is called universal relation, if each element of X is related to every element of X,
i.e. R = X × X

Equivalence Relation: A relation R defined on a set A is said to be an equivalence relation if R is reflexive, symmetric and transitive.

Bijective or One-one and Onto Function: A function f : X → Y is said to be a bijective function if it is both one-one and onto.

Invertible Function: A function f : X → Y is said to be invertible, if there exists a function g : Y → X such that gof = Ix and fog = Iy. The function g is called inverse of function f and is denoted by f-1.
Note
(i) To prove a function invertible, one should prove that, it is both one-one or onto, i.e. bijective.
(ii) If f : X → V and g : Y → Z are two invertible functions, then gof is also invertible with (gof)-1 = f-1og-1

Domain and Range of Some Useful Functions 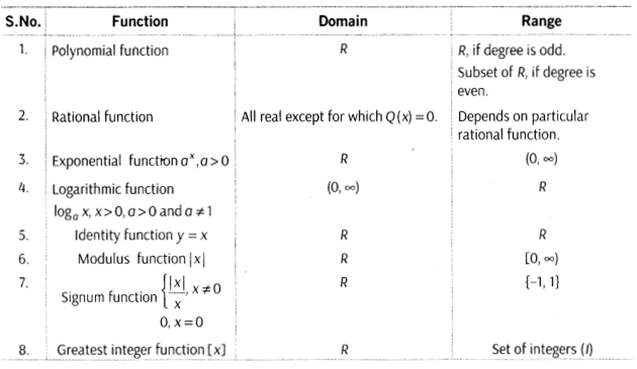 Invertible Element or Inverse: Let * : X × X → X be a binary operation and let e ∈ X be its identity element. An element a ∈ X is said to be invertible with respect to the operation *, if there exists an element b ∈ X such that a * b = b * a = e, ∀ b ∈ X. Element b is called inverse of element a and is denoted by a-1.
Note: Inverse of an element, if it exists, is unique.

Operation Table: When the number of elements in a set is small, then we can express a binary operation on the set through a table, called the operation table.