Representation of Vector: A directed line segment has magnitude as well as direction, so it is called vector denoted as

. Here, the point A from where the vector

Magnitude of a Vector: The length of the vector

is called magnitude of

and it is represented by |

| or a.
Note: Since, the length is never negative, so the notation |

Position Vector: Let O(0, 0, 0) be the origin and P be a point in space having coordinates (x, y, z) with respect to the origin O. Then, the vector

is called the position vector of the point P with respect to O. The magnitude of

Direction Cosines: If α, β and γ are the angles which a directed line segment OP makes with the positive directions of the coordinate axes OX, OY and OZ respectively, then cos α, cos β and cos γ are known as the direction cosines of OP and are generally denoted by the letters l, m and n respectively.

Types of Vectors
Null vector or zero vector: A vector, whose initial and terminal points coincide and magnitude is zero, is called a null vector and denoted as

. Note: Zero vector cannot be assigned a definite direction or it may be regarded as having any direction. The vectors

Unit vector: A vector of unit length is called unit vector. The unit vector in the direction of

Collinear vectors: Two or more vectors are said to be collinear, if they are parallel to the same line, irrespective of their magnitudes and directions, e.g.

Equal vectors: Two vectors are said to be equal, if they have equal magnitudes and same direction regardless of the position of their initial points. Note: If

but converse may not be true.

Negative vector: Vector having the same magnitude but opposite in direction of the given vector, is called the negative vector e.g. Vector

is negative of the vector

.
Note: The vectors defined above are such that any of them may be subject to its parallel displacement without changing its magnitude and direction. Such vectors are called ‘free vectors’.

To Find a Vector when its Position Vectors of End Points are Given: Let a and b be the position vectors of end points A and B respectively of a line segment AB. Then,

Note: The vector sum of three sides of a triangle taken in order is

respectively, then we get

Note: Both laws of vector addition are equivalent to each other.

Note: The associative property of vector addition enables us to write the sum of three vectors

Additive identity: For any vector

is its additive identity as

Additive inverse: For a vector

, a negative vector of

is its additive inverse as

Multiplication of a Vector by a Scalar: Let

be a given vector and λ be a scalar, then multiplication of vector

by scalar λ, denoted as λ

, is also a vector, collinear to the vector

whose magnitude is |λ| times that of vector

and direction is same as

Properties of Scalar Multiplication: For vectors

, we need to show that

Components of a Vector: Let the position vector of P with reference to O is

, this form of any vector is-called its component form. Here, x, y and z are called the scalar components of

are called the vector components of

along the respective axes.

Two dimensions: If a point P in a plane has coordinates (x, y), then

are unit vectors along OX and OY-axes, respectively.
Then, 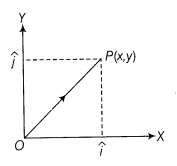 Three dimensions: If a point P in a plane has coordinates (x, y, z), then

are unit vectors along OX, OY and OZ-axes, respectively. Then, 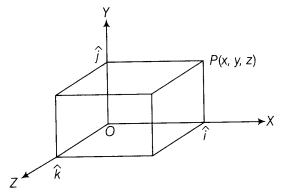 of point R, which divides the line segment joining the points A and B with position vectors

respectively, internally in the ratio m : n is given by

Note: Position vector of mid-point of the line segment joining end points A(

Dot Product of Two Vectors: If θ is the angle between two vectors

, then the scalar or dot product denoted by

is a real number
(ii) If either

, then θ is not defined. 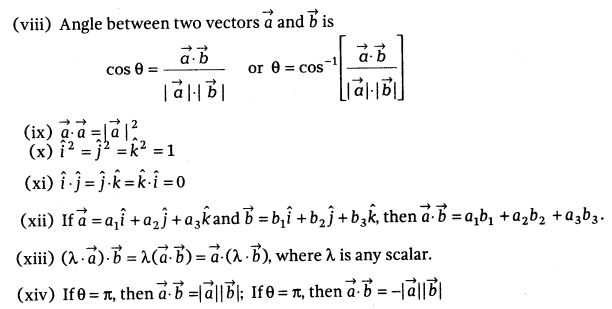 Vector (or Cross) Product of Vectors: If θ is the angle between two non-zero, non-parallel vectors

, then the cross product of vectors, denoted by

is a unit vector perpendicular to both

is a vector quantity, whose magnitude is 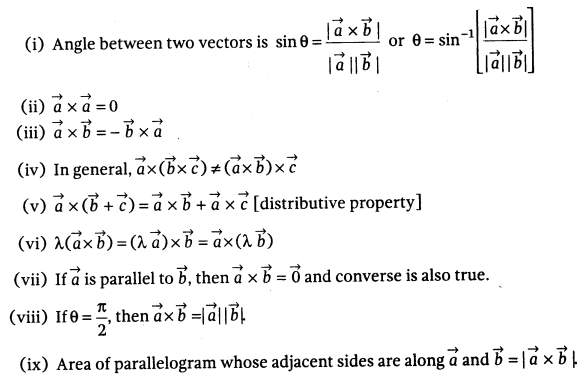 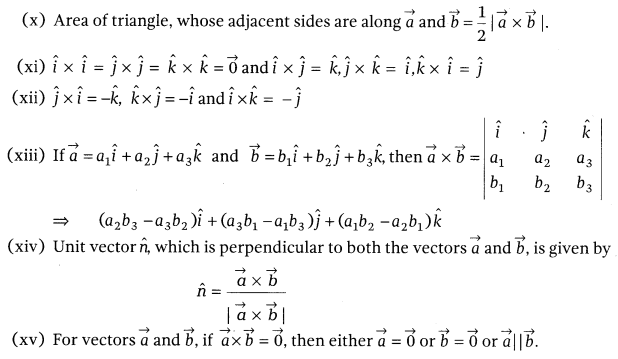 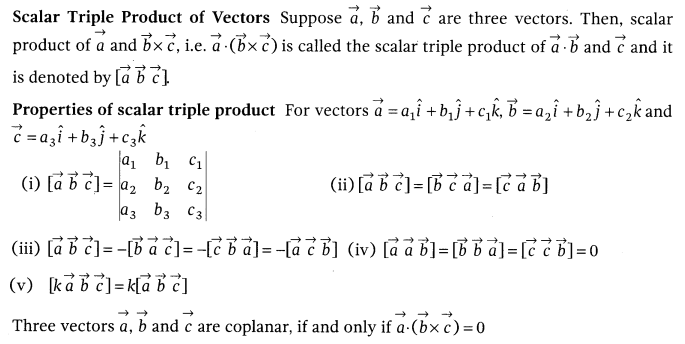