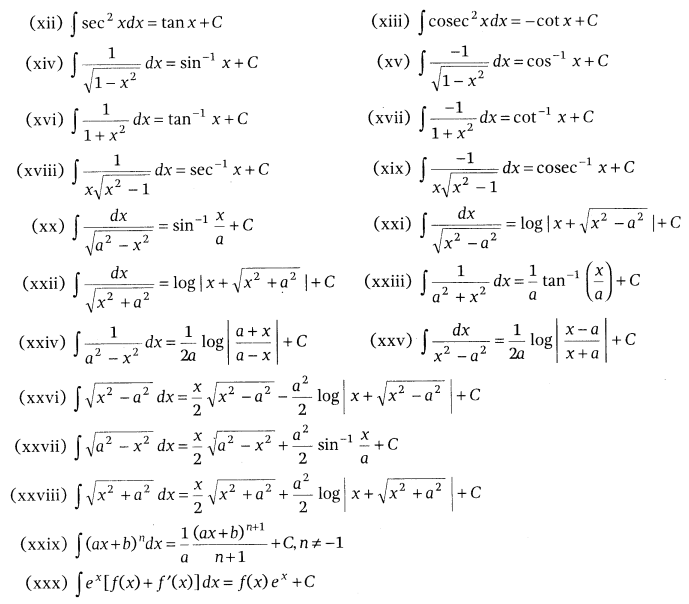 Integration using Trigonometric Identities
When the integrand involves some trigonometric functions, we use the following identities to find the integral:

Integration by Parts
For a given functions f(x) and q(x), we have
∫[f(x) q(x)] dx = f(x)∫g(x)dx – ∫{f'(x) ∫g(x)dx} dx
Here, we can choose the first function according to its position in ILATE, where
I = Inverse trigonometric function
L = Logarithmic function
A = Algebraic function
T = Trigonometric function
E = Exponential function
[the function which comes first in ILATE should taken as first junction and other as second function]

Note
(i) Keep in mind, ILATE is not a rule as all questions of integration by parts cannot be done by above method.
(ii) It is worth mentioning that integration by parts is not applicable to product of functions in all cases. For instance, the method does not work for ∫√x sinx dx. The reason is that there does not exist any function whose derivative is √x sinx.
(iii) Observe that while finding the integral of the second function, we did not add any constant of integration.

, where t(x) is a polynomial in x which can be integrated easily and degree of p1(x) is less than the degree of q(x) .

can be integrated by expressing

as the sum of partial fractions of the following type:

Integrals of the types

can be transformed into standard form by expressing

Integrals of the types

can be transformed into standard form by expressing px + q = A