Natural vegetation can be categorised into three categories namely; forest, grassland and desert.

The change in the type of natural vegetation occurs mainly because of the changes of climatic conditions.

(i) Thorny bushes are found in the dry desert-like regions.
(ii) These are found in areas with scanty rain and scorching heat.

(i) Mosses, lichens and very small Shrubs are found in cold regions. This is called tundra type vegetation.
(ii) It is found in polar areas.

The growth of natural vegetation depends on temperature and moisture. It also depends on factors such as slope and thickness of soil.

Natural vegetation is classified into three categories—forests, grasslands and shrubs.

Forests grow where temperature and rainfall are plentiful to support a tree cover. Forests may be dense and open.

Tropical evergreen forests also known as tropical rainforests are very dense and are found in the regions near the equator and close to the tropics. Hardwood trees such as rosewood, ebony, mahogany are common here.

Tropical deciduous forests are monsoon forests. They are found in the large part of India, Northern Australia and in Central America. They shed their leaves in dry seasons. Trees like sal, teak, neem and shisham are found here.

Temperate evergreen forests are commonly found along the eastern margin of the continents. In these forests both hard and softwood trees such as oak, pine, eucalyptus, etc. are found.

Temperate deciduous forests are found in the northeastern part of USA, China, New Zealand and Chile. They shed their leaves in the dry season. Trees like oak, ash, beech etc. and animals like deer, foxes, wolves are common in these forests.

Grasslands include tropical and temperate grasslands. Tropical grasslands grow in the areas of moderate to low amount of rainfall. Savannah grasslands of Africa present a suitable example of these types of grasslands. Animals like elephants, zebras, giraffes, dear are commonly found here.

Temperate grasslands are found in the mid-latitudinal zones and in the interior part of the continents. Short and nutritious grass in found here. Common animals are buffaloes, bison, antelopes etc.

Thorny bushes are found in the dry deserts. Here, vegetation cover is scarce because of poor rain and scorching heat. 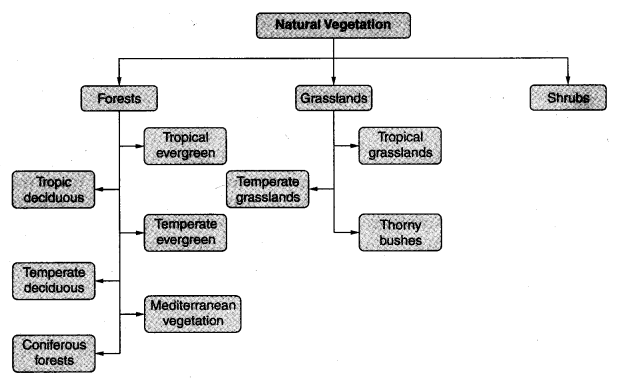 Forests: They grow where temperature and rainfall are plentiful to support a tree cover. Forests may be dense and open.

Grasslands: They grow in the region of moderate rain.

Shrubs: These consists of thorny shrubs and scrubs.

Anaconda: It is one of the world’s largest snakes found in the tropical rainforest. Taiga. It means pure or untouched in the Russian language.