1. In a democracy why is Universal Adult Franchise important?

2. Re-read the box on Article 15 and state two ways in which this Article addresses inequality?

3. In what ways was Omprakash Valmikis experience similar to that of the Ansaris?


Answer: Both Omprakash Valmiki and Ansaris were subjected to discrimination. Omprakash was not allowed to sit with other students in the classroom and was made to sweep the school and the playground only because he was a dalit. Similarly, the Ansaris were not given a flat in a locality where lived the people belonging to religion other than theirs. The moment the landlady came to know about their names, she declined to rent the house. In both the cases the dignity of a person is violated.

4. What do you understand by the term“all persons are equal before the law”? Why do you think it is important in a democracy?


Answer: It means that every person, from the President of the country to a domestic help like Kanta has to obey the same laws. No person can be discriminated against on the basis of their religion, race, caste etc. Every person has access to all public places including playgrounds, hotels, shops and markets. All persons can use publicly available wells, roads and bathing ghats.
Equality is the soul of democracy. We know that democracy is a form of government which gives equal importance and recognition to all. If inequalities on the basis of race, religion, caste, etc. continue to exist, democracy would never flourish. Instead, it would perish very soon.

5. The Government of India passed the Disabilities Act in 1995. This law states that persons with disabilities have equal rights, and that the government should make possible their full participation in society. The government has to provide free education and integrate children with disabilities into mainstream schools. This law also states that all public places including buildings, school etc., should be accessible and provided with ramps.
Look at the photograph and think about the boy who is being carried down the stairs. Do you think the above law is being implemented in his case? What needs to be done to make the building and accessible for him? 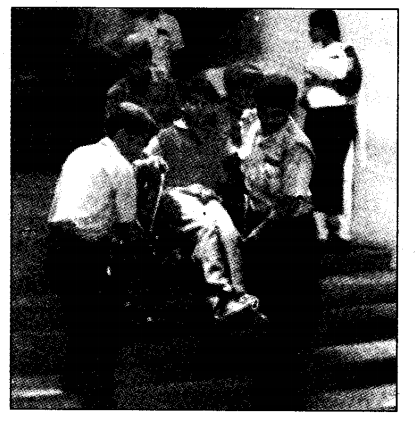 How would his being carried down the stairs affect his dignity as well as his safety?


Answer: The boy in the photograph is disabled. As per the law this building should have been accessible for him. But we see the law is not being implemented in his case. He is being carried down by security personnels through stairs. This building does not provide ramps. The boy’s dignity is overlooked here. He may morally feel inferior. The way he is carried down the stars may prove dangerous. Law should take this case to the court.

1. What is Joothan about?


Answer: It is about the bitter experiences of growing up of a dalit boy.

2. What suggestion was given to Ansaris by the property dealer?


Answer: They were suggested to change their names and call themselves Mr and Mrs kumar

3. On what basis were the Ansaris treated unequally?


Ans. The Ansaris were treated unequally on the basis of religion.


Answer: Dignity means thinking of one self and others as worthy of self-respect.

5. What are the two ways in which the government has tried to implement the equality that guaranteed in the constitution?


Answer:
(i) Through laws
(ii) Through government programmes or schemes to help unprivileged groups.

6. Who have been employed to cook the meal under midday meal scheme?


Answer: Dalit women have been employed for this purpose.

7. How did B.R. Ambedkar view self-respect?


Answer: B.R. Ambedkar viewed self-respect as the most vital factor in life, without which man was cipher.

8. What was the condition of the African-Americans in the United States of America prior to 1950s? [V. Imp.]


Answer: Prior to 1950’s, the African-Americans were treated extremely unequally in the USA and denied equality through law.

9. What is known as the Civil Rights Movements? [V. Imp.]


Answer: A movement took place in the USA in the late 1950’s to push for equal rights for African-Americans. This movement later came to be known as Civil Rights Movement.

1. What is it that makes Kanta unsure?


Answer: Kanta is a poor domestic worker. She lives in a slum which is very filthy. Her daughter is sick but she cannot skip work because she needs to borrow money from her employers to take her daughter to the doctor. Her job as a domestic help is not a permanent. She can be removed by her employers any time.

2. Mention two different kinds of inequalities that exist in our country. Give examples. [V. Imp.]


Answer: Two different kinds of inequalities that exist in our country are—inequalities based on the caste system and that based on the religion.
Omprakash Valmiki was treated extremely unequally because he was a dalit. In school, his headmaster made him sweep the school and the playground.
The Ansaris were treated unequally on the basis differences of religion. They were looking to rent an apartment in the city. They were about to take an apartment at the first sight. But the moment the land lady knew their names she declined to rent the house.

3. Write a note on equality in Indian democracy. [V. Imp.]


Answer: The Indian constitution recognises all persons as equals. This means that every individual in the country irrespective of his/her caste, religion, educational and economic backgrounds is recognised as equal. Although, inequality still exists in the country, yet the principle of the equality of all persons is recognised. While earlier no law existed to protect people from discrimination and ill treatment now there are several that work to see that people are treated with dignity.


Answer: The Civil Rights Act was passed in the year 1964. The Act prohibited discrimination on the basis of race, religion or national origin. It also stated that all schools would be open to African-American children and that they would no longer have to attend separate schools specially set up for them. However, a majority of African-Americans continue to be among the poorest in the country.

1. What are the provision made in the constitution for the recognition of equality? [V. Imp.]


Answer: The provisions made in the constitution for the recognition of equality are as follow:
(a) Every person is equal before the law. What this means is that every person, from the President of India to a domestic worker like Kanta, has to obey the same laws.
(b) No person can be discriminated against on the basis of their religion, caste, race place of birth or whether they are male or female.
(c) Every person has access to all public places including playgrounds, hotels, shops and markets. All persons can use publicly available wells, roads and bathing ghats.
(d) Untouchability has been abolished.

2. How can you say that establishment of equality in society is a continuous struggle?


Answer: Inspite of several efforts made by the government inequalities still exist in our society. Even today low caste people are being discriminated against and treated unequally. The reason behind it is that people refuse to think of them as equal even though the law requires it. This attitude of the people is so deeply rooted that it can not change all of a sudden. It will take a lot of time. Even though people are aware that discrimination is against the law, they continue to treat others unequally on the basis of caste and religion. People are also discriminated against on the basis of economic status, disability and gender.
Unless people believe that every person deserves to be treated equally and with dignity, the present attitude cannot be rooted out. Changing people’s attitude is a very slow process and hence establishment of equality in society is a continuous struggle.