Human Environment Interactions (The Tropical and the Subtropical Region)


Answer:
(a) South America.
(b) The people of the Amazon Basin grow tapioca, pine apple and sweet potato. Cash crops such as coffee, maize and cocoa are also grown.
(c) Name the birds that you are likely to find in the rain forests of the Amazon.
(d) The major cities located on the river Ganga are Allahabad, Kanpur, Varanasi, Lucknow, Patna and Kolkata.
(e) The one-homed rhinoceros is found in the Brahmaputra plain.

(b) Manioc is the staple food of
(i) Ganga Basin (ii) Africa (iii) Amazon.

(c) Kolkata is located on the river
(i) Orange (ii) Hooghly (iii) Bhagirathi.

(d) Deodars and firs are a type of
(i) Coniferous trees (ii) Deciduous trees (iii) Shrubs.

4. Give reasons:
(i) The rainforests are depleting.
(ii) Paddy is grown in the Ganga-Brahmaputra plains.


Answer:
(i) The rainforests are depleting because of the developmental activities that are going on at fast speed. The biologically diverse rainforests are being destroyed day by day. It is estimated that a large area of the rainforest has been disappearing annually in the Amazon basin. As a result the topsoil is washed away when the rains fall and the lush green forest turns into a barren landscape.
(ii)The cultivation of paddy requires sufficient water. The Ganga-Brahmaputra plains fulfil this condition because they receive high rainfall.

5. Map skills.
(i) Art an outline map of the Indian sub-continent, draw the rivers Ganga and Brahmaputra from the source to the mouth Also show the important tributaries of both the rivers.
(ii) On the political map of South America, draw the equator. Mark the countries through which the equator passes. 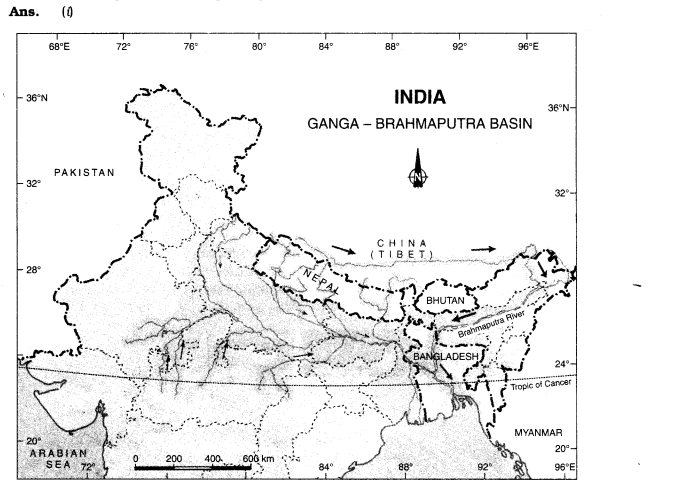 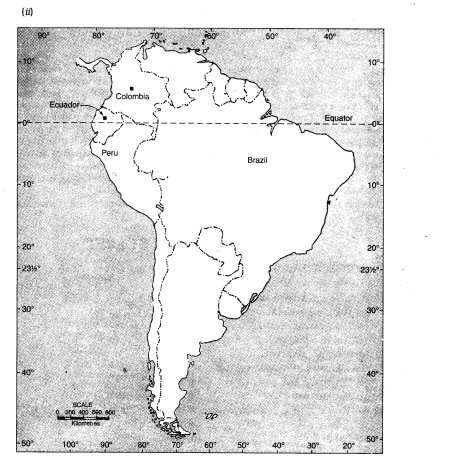 1. What type of vegetation grows in the Amazon forest?

2. Name the animals Found in the Amazon forest.

3. What do men and women of the rainforest do?


Answer: Men hunt and fish along the rivers and women take care of the crops.

4. What do the people of the rainforest grow?

5. Name the cash crops that people of the rainforest grow.

6. What is the population density of West Bengal and Bihar? .


Answer: The populations density of west Bengal is 904 and that of Bihar is 880.

7. What is susu? What does its presence indicate?


Answer: In the fresh water of River Ganga and River Brahmaputra, a variety of dolphin is found which is locally known as susu. Its presence indicates the health of the river.


Answer: Tarraces are built on steep slopes to create flat surfaces on which crops are grown.

9. By what names is the river Brahmaputra known in different places.


Answer: The wastewater from these towns and industries is discharged into the rivers. This leads to the pollution of the rivers.

11. Name the river on which Tcy Mahal is situated?

12. Name the cash crops grown in the Ganga-Brahmaputra Basin.

1. Write a short note on the climate of the Amazon Basin.


Answer: The climate of the Amazon Basin is characterised by hot and wet climate throughout the year. Both day and nights and almost equally hot and humid. It rains almost everyday. The day temperatures are high with very high humidity. At night the temperature goes down but the humidity remains high.

2. What do you know about the location of the Ganga-Brahmaputra Basin? Mention the climate of this Basin.


Answer: The Ganga-Brahmaputra Basin lies in the sub-tropical region that is situated between 10°N to 30°N latitudes. The tributaries of river Ganga such as the Ghaghra, the son, the Chambal, the Gandak, the Kosi and the tributaries of Brahmaputra drain it.
The area of the Ganga-Brahmaputra Basin is dominated by monsoon climate. The monsoon brings rains from mid-June to mid-September. The summers are hot and the winters are cool.

3. The Ganga-Brahmaputra Basin has varied topography. How does it affect the distribution of population there? [V. Imp.]


Answer: The basin area has varied topography. As a result, the distribution of population is not even everywhere in the area. The mountain areas with steep slopes have inhospitable terrain. Therefore less number of people live in the mountain area of the Ganga-Brahmaputra basin. The plain area provides the most suitable land for human habitation. Therefore, the density of population of the plains is very high.

4. What is the main activity of the people of the Ganga-Brahmaputra Basin? Give an account of it.


Answer: The main activity of the people of the Ganga-Brahmaputra Basin is agriculture. Paddy is the main crop here. Other crops grown here are wheat, maize, sorgham gram and millets. Cash crops like sugarcane and jute are also grown. Banana plantations are seen in some areas in the plain. In the West Bengal and Assam tea is grown in plantations. Silk is produced through the cultivation of silk worms in parts of Bihar and Assam. In the mountains and hills, where the slopes are gentle crops are grown on terraces.

5. How can you say that the life of the people of the Amazon basin is changing?[Imp.]


Answer: Time is moving ahead very fast. This has resulted in the change of the life style of the people everywhere. The life of the people of the Amazon basin is also changing, though not at fast speed. In the old days it was difficult to reach the heart of the forest. In 1970 the Trans Amazon highway made all parts of the rain forest accessible. Aircrafts and helicopters are also used for reaching various places. The indigenous populations was pushed out from the area and forced to settle in new areas.

6. What do you know about the wildlife of the Ganga-Brahmaputra basin? [V. Imp.]


Answer: The Ganga-Brahmaputra Basin is rich in wildlife. A variety oi animals are found here. Elephants, tigers, deer and monkeys are common. The one-horned rhinoceros is found in the Brahmaputra plain. In the delta region, Bengal tiger, crocodiles and alligator are found. Aquatic life abounds in the fresh river waters, the lakes and the Bay of Bengal Sea. Popular varieties to fish such as catla, rohu and hilsa can be found here.

7. How is tourism an important activity in the Ganga-Brahmaputra basin?


Answer: The Ganga-Brahmaputra plain has several big towns and cities, such as Allahabad, Kanpur, Varanasi, Lucknow, Patna and Kolkata. All these places are important from tourism point of view. Taj Mahal on the bank of river yamuna in Agra is a famous tourist place. Allahabad is situated on the confluence of the river Ganga and Yamuna. Several people visit this place everyday to have a holy dip in it. Buddhist stupas in Uttar Pradesh and Bihar, Lucknow with its Imambara, Assam with Kaziranga and Manas with wildlife sanctuaries are some other places in the basin where people from different parts of the country and abroad go with great enthusiasm.

1. How is the rainforest of the Amazon basin rich infauna?


Answer: The rainforest of the Amazon basin is very rich in fauna. A variety of birds such as toucans, humming birds, bird of paradise with their brilliantly coloured. Plumage and oversized bills for eating are found here.

These birds also make loud sounds in the forests. Animals like monkeys, sloth and ant-eating tapirs are found here. Various species of reptiles and snakes also thrive in these jungles. A number of crocodiles, snakes and pythous are also found here. Anaconda and boa constrictor are some of the species. The basin is also the home to thousands of species of insects. Several species of fishes including the flesh-eating Piranha fish is also found in the river.

2. What do you know about the people of the rainforest? [V- Imp.]


Answer: The people of the Amazon basin practise slash and bum agriculture. They grow most of their food in small areas after clearing some trees in the forest. Men hunt and fish along the rivers and women take care of the crops. They mainly grow tapioca, pineapple and sweet potato. As hunting and fishing are uncertain it is the women who support the family. They feed them the vegetables that they grow. Their staple food is manioc, also known as cassava that grows under the ground like potato. They also eat queen ants and egg sacs. Cash crops like coffee, maize and cocoa are also grown.

People get wood for their houses from the rainforests. They build thatched houses shaped like beehives. There are also malocas there which are large apartment­like houses with a steeply slanting roof.

The Amazon basin is developing day by day. In 1970 the trans Amazon highway made all parts of the rainforest accessible. With the change of time the people’s life style is also changing gradually.