1. Answer the following questions briefly:
(a) What are the two types of deserts found in the world?
(b) In which continent is the Sahara desert located?
(c) What are the climatic conditions of the Ladakh desert?
(d) What mainly attracts tourists to Ladakh?
(e) What type of clothes the people of the Sahara desert wear?
(f) Name the trees that grow in Ladakh

(a) The two types of deserts found in the world are hot deserts and cold deserts.

(b) The Sahara desert is located in Africa.

(c) The climate of the Ladakh desert is extremely cold and dry due to its high attitude which varies from about 3,000 m in Kargil to more than 8,000 m in the Karakoram. The air at this attitude is so then that the heat of the sun can be felt intensely. The day temperatures in summer are just above zero degree and the night temperatures are below -30°C. Winters are extremely cold with temperatures below -40°C for most of the time. There is very little rainfall in this region. It is as low as 10 cm every year. The area experiences freezing winds and burning hot sunlight. There is always a chance of sunstroke and frost bite at the same time.

(d) Ladakh is a famous tourist place. The tourists from within the country and abroad enjoy visiting Buddhist monasteries that dot the Ladakhi landscape with their traditional gompas.
The meadows and glaciers in Ladakh also attract these tourists. The ceremonies and festivities in which the local people keep themselves engaged during winter months are great attractions to the tourists.

(e) The people of the Sahara desert wear heavy clothes.

(f) Scanty patches of grasses and shrubs, groves of willows and poplars, fruit trees such as apples, apricots and walnuts.

2. Tick the correct answer:
(i) Sahara is located in which part of Africa?
(a) eastern (b) northern (c) western.

4. Give reasons:
(i) There is scanty vegetation in the deserts.
(ii) People of the Sahara desert wear heavy robes.


Answer: (i) The elimate of the deserts is either very hot and dry or very cold and dry. Both the conditions are not favourable for the growth of vegetation. Besides this, there is poor rainfall in the deserts. Due to lack of sufficient water, deserts usually have scanty vegetation.
(ii) People of the Sahara deserts wear heavy robes in order to protect themselves from the dust storms and hot winds. 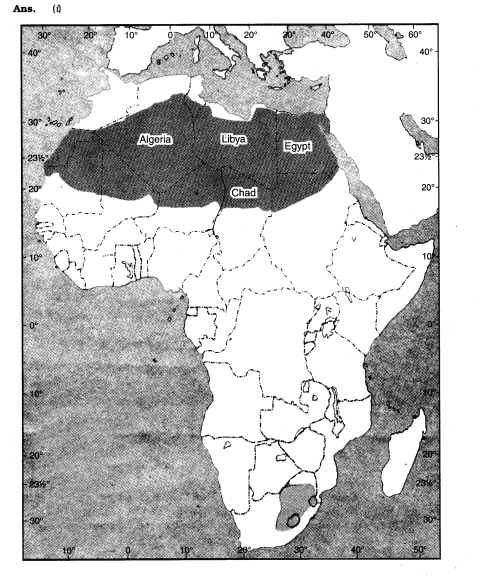 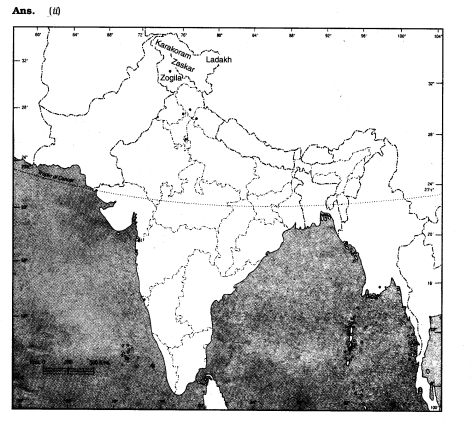 1. How many countries are touched by the Sahara desert? Name them.

2. What are the two characteristic features of a desert? [V. Imp.]


Answer: The climate of a desert is either very hot and dry or veiy cold and diy.
The vegetation is sparse.

3. Mention the day and night temperatures of the Sahara desert.


Answer: The day temperature—It may soar as high as 50°C.
The night temperature—Nearing zero degrees

4. What vegetation is found in the Sahara desert?


Answer: Vegetation in the Sahara desert is comprised of cactus, date, palms and acacia.
Green islands with date palms can be seen near the oases.

5. Name the two nomadic tribes living in the Sahara desert.


Answer: The Bedouins and Tuaregs.

6. Name the animals reared by the Bedouins and Tuaregs.

7. What do these animals provide them?


Answer: These animals provide them with milk and hides.

8. Name the countries associated with the discovery of oil.

9. Ladakh is made up of two words. Mention these words with their meaning.


Answer: The two words with which Ladakh is made up of are La meaning mountain pass and Dak meaning country.

10. Where is Ladakh located?


Answer: Ladakh is located in the Great Himalayas, on the eastern side of Jammu and Kashmir.

11. Name an important river that flows through Ladakh.

12. Why is there little rainfall in the Ladakh desert? [Imp.]


Answer: It is because the Ladakh desert lies in the rain shadow of the Himalayas.

13. Name the birds which are common in the Ladakh desert.

14. What is the use of the hair of the sheep and goat in the cold desert of Ladak?


Answer: The hair of the sheep and goat is used to make woollens.

15. Why do people hunt Chiru or the Tibetan antelope?


Answer: People hunt the Chiru or the Tibetan antelope for its wool known as Shahtoosh

16. Name some famous monasteries of Ladakh

17. Which National Highway connects Leh to Kashmir valley and through which pass?


Answer: The National Highway A connects Leh to Kashmir valley through the Zojila pass.

1. Describe the Climate of the Sahara desert. [V. Imp.]


Answer: The Sahara desert experience scorching hot and parch dry climate. The rainy season occurs for the short time. The sky is cloudless and clear. Days are extremely hot. The temperatures during the day may rise as high as 50°C. The nights may be freezing cold with temperatures nearing zero degrees.

2. Mention the summer and winter activities of the people of the Ladakh desert.[V. Imp.]


Answer: In the summer season the people of the Ladakh desert are busy in cultivation work. They grow crops such as barley, potatoes, peas, beans and turnip. The climate during winters is very harsh and people keep themselves engaged in festivities and ceremonies. The women manage the house and fields with great efficiency. They also manage small business and shops.

3. Describe the flora and fauna found in the Sahara desert.


Answer: Flora. The Sahara desert has vegetation such as cactus, date palms and acacia. In same places there are oases where one can see green islands with date palms. Fauna. The animals found in the Sahara desert are camels, hyenas, jackals, foxes, scorpions, several varieties of snakes and lizards.

1. Describe the people of the Sahara desert Also write about their activities. [V. Imp.]


Answer: The Sahara desert experiences harsh climate. Despite that various groups of people such as the Bedouins and Juaregs live here. These are nomadic tribes who pursue different activities. They rear animals such as goats, sheep, camels and horses. They get jnilk and hides from these animals. They prepare leather from hides. This leather is used in making belts, slippers, water bottles. They use the hair of these animals in making mats, carpets, clothes and blankets. The people of the Sahara desert wear heavy robes to protect themselves from the dust storms and hot winds.

The oasis in the Sahara desert and the Nile valley in Egypt support settled population. Since water is available, people grow date palms. They also grow rice, wheat, barley and beans.

The Sahara is undergoing change with fast speed. Tuaregs, the nomadic tribe, are now acting as guides to foreign tourists. More and more nomadic herdsmen are migrating to cities in search of jobs in oil and gas operations.

2. Describe the flora and fauna found in the Ladakh desert. [V. Imp.]


Answer: Flora—Vegetation is scanty in the Ladakh desert. There are scanty patches of grasses and shrubs. Groves of willows and poplars are seen in the valleys. During the summers, fruit trees such as apples, apricots and walnuts grow.

Fauna. Several species of birds are found in the Ladakh desert. Robins, redstarts, Tibetan snowcock, raven and hoopoe are common. The animals found in this region are wild goats, wild sheep, yak and special kinds of dogs.