1. Triangle: A plane figure bounded by three line segments is called a triangle.
In ΔABC has
(i) three vertices, namely A, B and C.
(ii) three sides, namely AB, BC and CA.
(iii) three angles, namely ∠A, ∠B and ∠C.

4. Area of a Triangle: The measure of the surface enclosed by the boundary of the triangle is called its area. 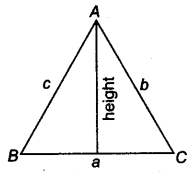 5. Area of a Triangle (Heron’s Formula): If a triangle has a, b and c as sides, then the area of a triangle by Heron’s formula =

Note: This formula is highly applicable in the case when we don’t have the exact idea about height. 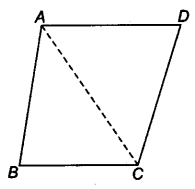 Area of quadrilateral ABCD = Area of ΔABC + Area of ΔADC