Law of Chemical Combination
Given by Lavoisier and Joseph L. Proust as follows:
1. Law of conservation of mass: Mass can neither be created nor destroyed in a chemical reaction. e.g., A + B → C + D Reactants → Products Mass of reactants = Mass of products

2. Law of constant proportion: In a chemical substance the elements are always present in definite proportions by mass.
E.g., in water, the ratio of the mass of hydrogen to the mass of oxygen is always 1 : 8 respectively.

These laws lacked explanation. Hence, John Dalton gave his theory about the matter. He said that the smallest particle of matter is called ‘atom’.

Atom
Atoms are the smallest particles of an element which can take part in a chemical reaction.
Size of an atom: Atomic radius is measured in nanometres.

Symbols of atoms:
(a) Symbols for some elements as proposed by Dalton:

(b) Symbols of some common elements: 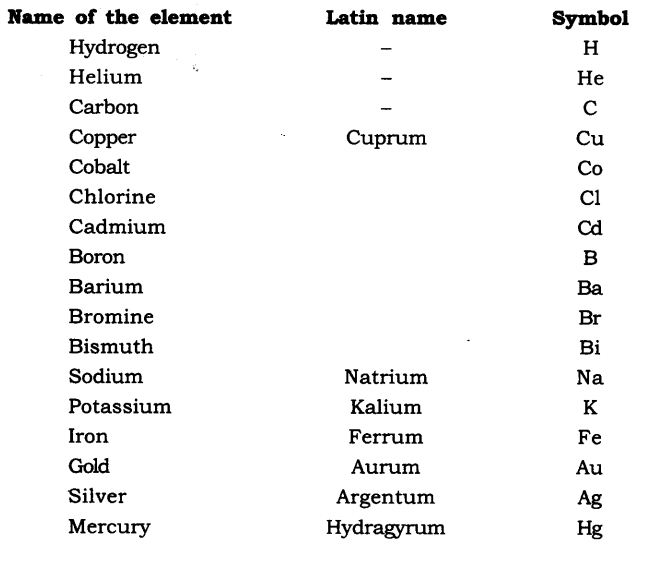 Molecule
It is the smallest particle of an element or a compound which can exist independently.

Atomicity
The number of atoms constituting a Molecule is known as its atomicity. 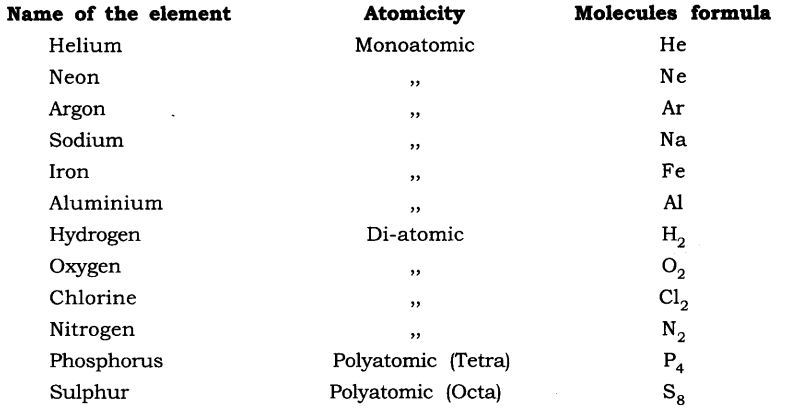 Valency
The combining capacity of an element is known as its valency. Valency is used to find out how the atom of an element will combine with the atom of another element to form a chemical compound.
(Every atom wants to become stable, to do so it may lose, gain or share electrons.) 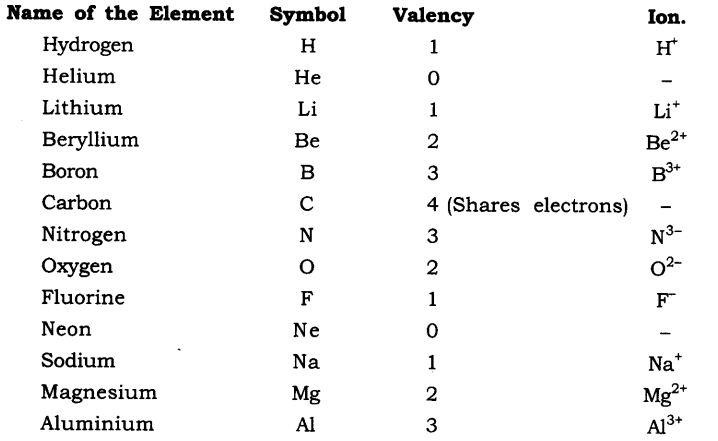 Some elements show more than one valency,hence termed as variable valency.

Chemical Formulae
Rules: (i) The valencies or charges on the ion must balance.
(ii) Metal and non-metal compound should show the name or symbol of the
metal first.
e.g., Na+ Cl– → NaCl
(ii) If a compound consists of polyatomic ions. The ion is enclosed in a bracket before writing the number to indicate the ratio.
e.g., [SO4]2- → polyatomic radical
H1+ SO42-  →  H2SO4

Molecular Mass
It is the sum of the atomic masses of all the atoms in a molecule of the substance. It is expressed in atomic mass unit (u).

Formula Unit Mass
It is the sum of the atomic masses of all atoms in a formula unit of a compound. The constituent particles are ions.