Diversity: This earth is full of organisms of various shapes and sizes. The largest Phylum of animal kingdom alone contains over a million species. There are varieties of plants, right from small grasses to tall Eucalyptus trees. This variety in living beings is called diversity.

Biodiversity: The variety of animals and plants living in a given geographical area is called biodiversity of that geographical area.
Need for a System of Classification: Because of the huge diversity in living beings it becomes very difficult task to study each of them one by one. To make their study easier animals and plants were categorized in groups and sub¬groups. Thus the system of classification started.

Classification by Aristotle: Aristotle classified animals according to their living environment. So he categorized them as either aquatic or terrestrial.

Drawbacks of Aristotle’s Classification: Both in sea as well as on land we can find animals and plants. Moreover, there are very small animals, like sea-horse, along with large animals, like whale. So, this was not a good basis of classification.

Basis of Classification
(a) Presence or Absence of Nucleus in Cells
Prokaryotes: Those organisms which have cells without well defined nucleus are called prokaryotes.
Eukaryotes: Those organisms which have cells with well defined nucleus are Called eukaryotes. Presence of nucleus and membrane-bound organelles gives better efficiency to cells.

(b) Number of Cells in an Organism
Unicellular: Those organisms having single cell are termed as unicellular organisms. In them the single cell is responsible for carrying out all necessary functions to maintain life.
Multicellular: Those organisms having more than one cell are called multicellular organisms. Because of more number of cells there can be some division of labour to gain more efficiency.

(c) Mode of Nutrition
Autotrophs: Organisms producing their own food are called autotrophs. All green plants are autotrophs. They have a pigment (chlorophyll) in green parts which facilitates photosynthesis.
Heterotrophs: Organisms dependent on either plants or animals are called heterotrophs.They don’t have chlorophylls. All animals, fungi and certain bacteria and protozoa belong to this group.

(d) Level of Organisation in Body
In multicellular organisms which are small, like hydra particular group of cells are assigned a particular function. But in larger organisms, tissues group to form an organ, which in turn make organ system. For example, in human beings there are separate systems for performing specific tasks.

Even in larger plants there is separate root system for conduction of water and minerals, leaf for photosynthesis and flowers for reproduction. Based on these characters organisms can be further classified into various sub-groups.

Evolutionary Relationship or Phylogenetic Relationship
Charles Darwin wrote a book “Origin of Species’ in 1859 and gave his theories of evolution. As per his theories all organisms have evolved from unicellular organisms. Primitive body designs came early in evolutionary history leading to more complex designs. This gave rise to such a huge diversity in life forms. Because of common ancestry, all organisms are related. The closer evolutionary relation between two organisms is also one of the basis of classification of organisms.

The Hierarchy of Classification—Groups
Biologists, such as Ernst Haeckel (1894), Robert Whittaker (1959) and Carl Woese (1977) have tried to classify all living organisms into broad categories, called kingdoms.

Thus, by separating organisms on the basis of a hierarchy of characteristics into smaller and smaller groups, we arrive at the basic unit of classification, which is a ‘species’. Broadly, a species includes all organisms that are similar enough to breed and perpetuate. 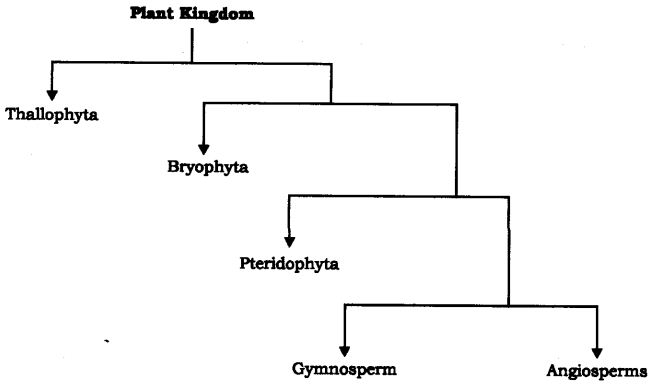 Thallophyta or Algae: Plants that do not have well-differentiated body design fall in this group. The plants in this group are commonly called algae. These plants are predominantly aquatic. Examples are Spirogyra, Ulothrix, Cladophora and Chora.

Bryophyta: These are called the amphibians of the plant kingdom. The plant body is commonly differentiated to form stem and leaf-like structures. However, there is no specialized tissue for the conduction of water and other substances from one part of the plant body to another. Examples are moss (Funaria) and Marchantia.

Pteridophyta: The plant body is differentiated into roots, stem and leaves and has specialized tissue for the conduction of water and other substances from one part of the plant body to another. Some examples are MarsUea, ferns and horse-tails.

Gymnosperms: The plants of this group bear naked seeds and are usually perennial, evergreen and woody. Examples are pines and deodar.

Angiosperms: This word is made from two Greek words: angio means covered and sperma—means seed. The seeds develop inside an organ which is modified to become a fruit. These are also called flowering plants. Plant embryos in seeds have structures called cotyledons.

Cotyledons: Cotyledons are called ‘seed leaves’ because in many instances they emerge and become green when the seed germinates.
The angiosperms are divided into two groups on the basis of the number of cotyledons present in the seed.

Classification of Kingdom Animalia: Kingdom Animalia is further classified into several following phylum. Each phylum has it own classes, sub-classes orders, families, etc.