Life exists on earth due to its ambient temperature, water, food and energy from the sun.

Lithosphere: The outer crust of the earth is called the lithosphere.

Hydrosphere: Sum of all water bodies is called hydrosphere.

Atmosphere: Air that covers the earth is called the atmosphere.

Air: It is a mixture of many gases like oxygen, nitrogen, carbon-dioxide, water vapour and other gases.

Atmosphere: Acts as a protective blanket around the earth. Maintains the temperature on the surface of earth. Winds are caused due to uneven heating of atmosphere, these winds maintains the pressure difference and causes cold and hot air, sea and land breeze, brings rain etc.

Rain: The clouds formed due to the evaporation of water condenses and precipitates as rain.

Soil: Soil is formed by a very slow process i.e., by weathering of rocks. It consists of various nutrients. Plants grow in the soil, many microbe’s homes is soil.

Varieties of soil types are available

Temperature: Temperature and light is also required for all biotic components.

Water Cycle: Water from various sources evaporates, condenses and again precipitates as rain, falls on the land, flows back in the sea and river is known as water cycle. 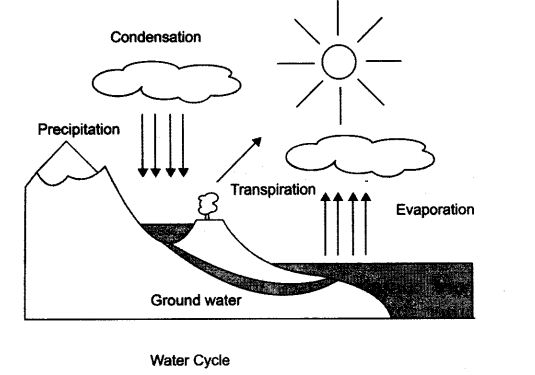 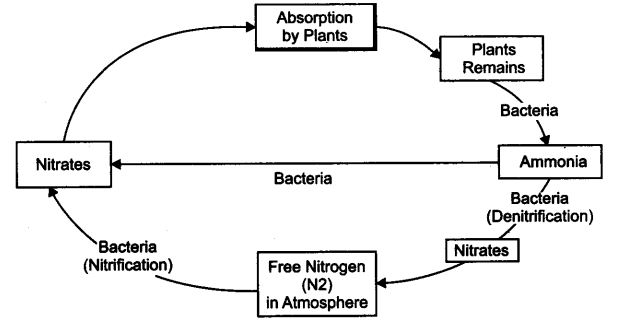 Nitrogen from the atmosphere is fixed by the process of nitrification. Nitrification is done by nitrogen fixing bacteria e.g. Rhizobium present in soil, these compounds of nitrogen are absorbed by plants. The fixation is also done by atmosphere or industries. In atmosphere, during lightning, high temperatures and pressures created in air converts nitrogen into oxides of nitrogen, which dissolves in water forming nitric and nitrous acids and is then used by life forms.

Plants contain nitrogen in the form of proteins or other complex compounds. Plants are eaten by animals. When die bacteria present in soil act on and convert plants and animals various compounds of nitrogen into nitrites and nitrifies. Another group of bacteria convert these nitrates and nitrites into free, elemental nitrogen, this process is called denitrification.

Carbon Cycle: Carbon is present in the compound form in atmosphere ie., CO2, carbonates in water which forms limestone.
CO2 is taken by plants during photosynthesis to form organic compounds like glucose, carbohydrates, these plants are further eaten by animals, and decomposition gives CO2 back to the atmosphere. Plants and animals which get buried under the earth and does not decompose form coal and petroleum respectively.
Animals and plants also release CO2 back to the atmosphere during respiration.