(i) Tropic of Cancer does not pass through

(ii) The easternmost longitude of India is

(iv) If you intended to visit Kavaratti during your summer vacations, which one of the following Union Territories of India will you be going to?

(v) My friend hails from a country which does not share land boundary with India. Identify the country.

(i) Name the group of islands lying in the Arabian Sea.

(ii) Name the countries which are larger than India.

Answer : Russia, Canada, USA. China, Australia and Brazil are the countries that are larger than India.

(iii) Which island group of India lies to its South-East?

Answer : Andaman and Nicobar Islands lie to the South-East of India.

(iv) Which island countries are our Southern neighbours?

Answer : Sri Lanka and Maldives are the two island countries that are the Southern neighbours of India.

Question 3. The Sun rises two hours earlier in Arunachal Pradesh as compared to Gujarat in the West but the watches show the same time. How does this happen?

Question 4. The central location of India at the head of the Indian Ocean is considered of great significance. Why?

Answer : The Indian landmass has a central location between East and West Asia. India is a southward extension of the Asian continent.

The Deccan peninsula protrudes into the Indian Ocean, thus helping India to establish close contact with West Asia, Africa and Europe from the Western coast and South-East and East Asia from the Eastern coast.

No other country has a long coastline on the Indian Ocean as India has.

Thus, India’s eminent position in the Indian Ocean Justifies the naming of an ocean after it.

Question 1. Identify the following with the help of map reading. 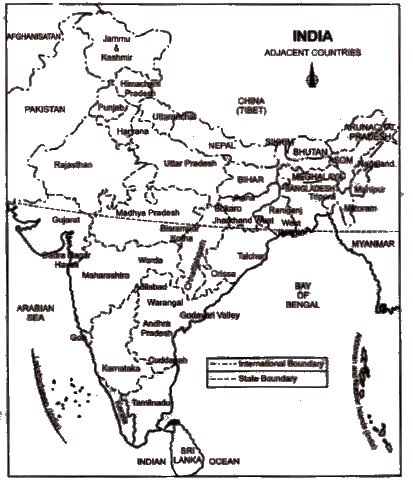 (i) The island groups of India lying in the Arabian Sea and the Bay of Bengal.

(iii) The states through which the Tropic of Cancer passes.

(iv) The northernmost latitude in degrees.

(v) The southernmost latitude of the Indian mainland in degrees.

(vi) The eastern and the Westernmost longitude in degrees.

(vii) The place situated on the three seas.

(ix) The Union Territories of India.

(i) Find out the longitudinal and latitudinal extent of your state.

Answer : Do it yourself. Sample answeris given below

(ii) Collect information about the ‘Silk Route: Also find out the new developments which are improving communication routes in the regions of the high altitude.

Answer : (a) Do it yourself. It is given in your History book. Some information is given below

The Silk Road or Silk Route refers to a historical network of interlinking trade routes across the Afro-Eurasian landmass that connected East, South. and Western Asia with the Mediterranean and European world, as well as parts of North and East Africa.

The land routes were supplemented by sea routes, which extended from the Red Sea to coastal India, China and South-East Asia.

Extending 4,000 miles (6,500 km), the Silk Road gets its name from the lucrative Chinese silk trade along it. which began during the Han Dynasty (206 BCE – 220 CE). The central Asian sections of the trade routes were expanded around 114 BCE by the Han dynasty largely through the missions and explorations of Zhang Qian, but earlier trade routes across the continents already existed.

In the late Middle Ages. transcontinental trade over the land routes of the Silk Road declined as sea trade increased. In recent years, both the maritime and overland Silk Routes are again being used, often closely following the ancient routes.

(b) Communication routes in regions of high altitude are now-a-days through helicopter (for closer distances) and through high altitude railways like the Ouinghai railway in China linking Lhasa (capital of Tibet) with the rest of the world. More information can be found on this railway from the internet.