Question 1. Imagine that it is 1950 and you are a 60-year-old Raika herder living in post-Independence India. You are telling your grand-daughter about the changes which have taken place in your lifestyle after Independence. What would you say?

Answer Since the coming of independence, my life has changed quite a bit. Since now there is not enough pasture for our animals, we had to reduce the number of the animals we keep. We have changed our grazing grounds also, as those on the banks of the River Indus have gone into Pakistan and we are not allowed to go there.

So, we have found alternative grazing grounds in Haryana, where our herds go when the harvest has been cut. At this time they can feed on the stumps of the plants remaining and also fertilise the soil with manure from their excreta.

Your father did not like a herder’s life and so he decided to become a farmer. I gave him my savings to buy some land and now he is cultivating food grains. I think you will have a much better life than what we had.

Question 2. Imagine that you have been asked by a famous magazine to write an article about the life and customs of the Maasai pre-colonial Africa. Write the article, giving it an interesting title.

Answer Peculiarities of Maasai Culture The word Maasai means ‘My People’ (‘Maa’ means My and ‘sai’ means people, in their language). They are traditionally nomadic and pastoral people. The males in their society are-divided into two parts – Elders and Warriors. The elders belong to the higher age group and decide on the affairs of the community by meeting as a group and also settle disputes.

The Warriors are the younger group who are responsible for the protection of the tribe. They also organize cattle raids when required. Since cattle are their wealth, these raids assume importance. as in this way they are able to assert their power Over other pastoral groups. However, the Warriors are subject to the authority of the Elders.

Question 3. Find out more about the some of the pastoral communities marked in Figs. 11 and 13. 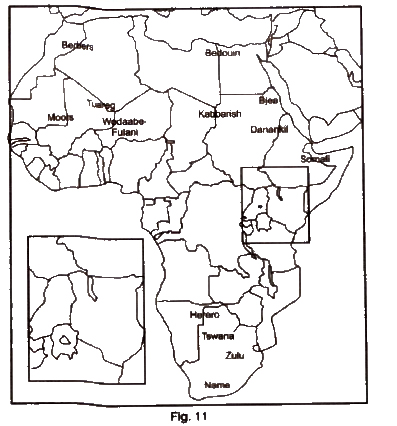 Pastoralists in the Modem World 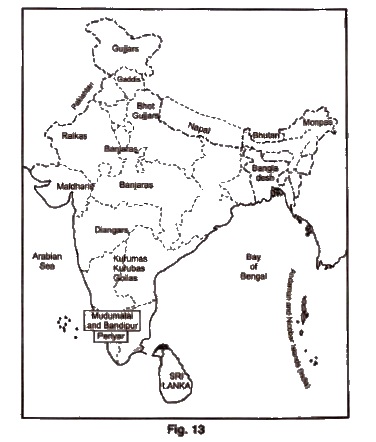 Answer Do it yourself

Question 1. Explain why nomadic tribes need to move from one place to another? What are the advantages to the environment of this continuous movement ?

Answer Nomads are people who do not live in one place but move from one area to another to earn their living. Their main occupation is cattle rearing for which they need availability of water and pastures for grazing their animals. When the pastures get depleted they move to another place with their animals. looking for pasture and water. When the water and pasture get depleted they move again and keep repeating the cycle.

Question 2. Discuss why the colonial Government in India brought in the following laws. In each case explain how the law changed the lives of the pastoralists.

(a) Waste Land Rules To the colonial officials all uncultivated land appeared to be unproductive Therefore grazing lands were also considered as wastelands as they produced neither revenue nor agricultural produce. The colonial government wanted to bring the grazing lands under cultivation so that they could get revenue and agriculture goods form this land.

According to wasteland rules. the uncultivated lands were taken over and given to select individuals who were granted concessions and encouraged to settle these lands.

Therefore, expansion of cultivation inevitably meant the decline of pastures and created problems and hardships for the pastoralists.

(b) Forest Acts By the mid nineteenth century. various Forest Acts were also being enacted in the different provinces of India. Through the
Forest Acts, the forests were divided into two categories; reserved forests and protected forests.

Effects of the Forest Acts Pastoralists could no longer remain in an area even if forage was available.

They could enter only by getting pemit for entry.

Pastoralists in the Modern World

If they overstayed the specified period of time they were liable to fines.

Their lives became difficult and full of hardships

Their traditional rights were severely restricted.

(c) Criminal Tribes Act The British officials were suspicious of nomadic people. They distrusted mobile craftsmen and traders who hawked their goods in villages and pastoralists who changed their places of residence every season, moving in search of good pastures for their herds.

Those who were nomadic were considered to be criminal and those who were settled as peaceable and law abiding.

In 1871, the colonial government passed the Criminal Tribes Act. By this Act many communities of craftsmen, traders and pastoralists were classified as criminal tribes.

They were stated to be criminal by nature and birth.

Effects of Criminal Tribes Act After this act was enforced. these communities were expected to live only in notified village settlements. They were not allowed to move out without a permit. The village police kept a continuous watch on them. They could no larger move from one place to another.

(d) Grazing Tax The Grazing Tax in India was introduced by the colonial government in the mid nineteenth century. Pastoralists had to pay tax on
every animal they grazed on the pastures. The tax per head of cattle went up rapidly and the system of collection was made increasingly efficient. In {he decades between the 1850s and the 1880s, the right to collect tax was auctioned out to contractors. The contractors tried to extract as high a tax as they could. By the 1880s, the government began collecting taxes directly from the pastoralists

Effects of the Grazing Tax Pastoralists had to pay tax on every animal they grazed on the pastures.

The tax vent up rapidly. So, the economic hardship of the pastoralists increased.

Question 3. Give reasons to explain why the Maasai community lost their grazing lands.

Answer European countries scrambled for possession of territories in Africa and sliced up the region into different colonies. In 1885, Maasailand was cut Into half with an international boundary between British Kenya and German Tanganyika.

Subsequently. grazing lands were taken over for White settlement and the Maasai were pushed into a small area in South Kenya and North Tanganyika. The Maasai lost about 60% of their precolonial lands.

Encouragement was given by the British colonial government in East Africa to peasant communities to expand cultivation and pasture lands were. converted into cultivated fields.

Large areas of grazing land were also turned into game reserves like the Maasai Mara and Samburu National Park in Kenya and Serengeti Park in Tanganyika. Pastoralists were not allowed to enter these reserves. They could neither hunt animals nor graze herds in these areas.

Very often these reserves were in areas that had traditionally been regular grazing grounds for Maasai herds.

Question 4. There are many similarities in the way in which the modern world forced changes in the lives of pastoral communities in India and East Africa. Write about any two examples of changes which were similar for Indian pastoralists and the Maasai herder.

Answer Both India and East Africa were under the control and dominance of the European colonial powers with similar intentions and objectives.

In both places, the pastoral communities lost the pasture land because the colonial powers took control of these pastures and brought them under cultivation.

Both in India and East Africa, forest laws were made and the pastoralists were not permitted to use the forests for grazing or taking out forest produce.

So, in India and Africa, the pastures or the grazing land declined and created a lot of hardship for the pastoral communities.