Question 1. Draw a timeline from 1650 to 1930 showing the significant agricultural changes which you have read about in this chapter. 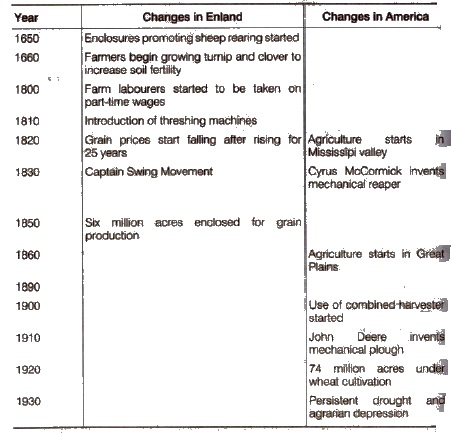 Question 2. Fill in the following table with the events outlined in this chapter. Remember, there could be more than one change in a country.

Question 1. Explain briefly what the open field system meant to rural people in the 18th century England? Look at the system from the point of view of

(a) A Rich Farmer The open field system was not beneficial for the rich farmer. A rich farmer preferred to expand his land holding by enclosing the open land. In the 18th century, the second round of enclosing open fields took place to increase grain production.

(b) A Labourer All villagers had access to common land or the open fields. The small poor farmers and labourers used the open fields for grazing sheep and cows. They fished in the rivers and ponds and hunted rabbit in common forests. For the poor labourer the open common land was essential for survival. It supplemented their meagre income, sustained their cattle and helped them tide over bad times when the crops failed.

(c) A Peasant Woman The poor woman collected fuelwood for fire and berries and fruit for food during the time of open fields and commons. So, it was beneficial to peasant women.

Question 2. Explain briefly the factors that led to the enclosures in England.

Answer The factors that led to the enclosure movement in England were the increase in pnces of wool In the international market and the increased demand for food grains in England.

Because of the war with France, trade was disrupted and import of grain from Europe declined, increasing prices of foodgrains in England This encouraged landowners to enclose land and enlarge areas under grain cultivation, leading to the second enclosure movement.

Question 3. Why were threshing machines opposed by the poor in England?

Answer The poor labourers lived and worked on the land of the rich farmers for their livelihood and survival. During the Napoleonic wars the rich farmers introduced the threshing machines which reduced the demand for labour, as a result of which unemployment increased among the labourers.

The poor labourers thought that the machines were taking away their jobs and livelihoods and so they opposed the threshing machines and started destroying them and threatening the rich farmers to stop using them.

Question 4. Who was Captain Swing? What did his name symbolise or represent?

Answer Captain Swing was a mythical name used in the threatening letters written by the poor labourers in rural England to the rich farmers telling them to stop using threshing machines or face the consequences The rich farmers had Introduced threshing machines, due to which demand for labour decreased which caused the labourers to become agitated.

The name Captain Swing symbolised or represented the anger of the poor labourers in rural England who wanted return to the pre machine days when human labour was used.

QUestion 5. What was the impact of the westward expansion of settlers in the USA ?

Answer With the westward expansion of settlers in USA the landscape of the country was transformed radically. White Americans had moved westward and established control upto the West coast. displacing local tribes and carving out the entire landscape into different agricultural belts.

USA came to dominate the world market in agricultural produce. The local American Indians were driven out from their homeland. Many wars were fought in which Indians were massacred and their villages burnt. Gradually, the whole of America was taken over by the white settlers.

Question 6. What were the advantages and disadvantages of the use of mechanical harvesting machines in the USA?

The mechanical reaper involved by Cyrus McCormick Cormic could cut in one day as much as five men could cut with cradles and 16 men with sickles. With a combined harvester 500 acres of wheat could be harvested in two weeks. With power driven machinery four men could plough, seed and harvest 2,000 to 4,000 acres of wheat in just two weeks.

Question 7. What lessons do we draw from the conversion of the countryside in the USA from a bread basket to a dust bowl?

Answer Overuse and overexploitation of the soil for cultivation by machinery turned the soil into dust, ultimately leading to dust storms. These suffocated the people and cattle leading to their death, and clogged the machines and the tractors and damaged them beyond repair. The bread basket had turned into a dust bowl.

From this experience we learn that we should not overuse and over exploit our resources because it leads to ecological damage and environmental imbalance. To avoid that we should have respect for nature and ecology for a better future.

Question 8. Write a paragraph on why the British insisted on farmers growing opium in India?

Answer In the late 18th century, the east India Company was buying tea and silk from China for sale in England. As tea became a popular English drink, trade in tea became important, moving upto 50 million pounds in value. This created a problem because England at this time produced nothing that could be sold in China. The Chinese were suspicious of foreign goods and Chinese rulers did not allow foreign goods to enter China, so payment could be made only in silver coins or bullion which was unacceptable to the British because it would impoverish the nation.

The British therefore started an illegal trade in opium with Chinese merchants. The profit from opium trade could be used to buy tea and silk from China. The British needed more and more opium jo export to China and therefore they insisted that Indian farmers should grow opium to fulfil the opium demand from China.

Question 9. Why were the Indian farmers reluctant to grow opium?