Magnets are pieces of iron or other materials which exhibit the properties of magnetism i.e. the ability to attract other objects that contain iron. Compass needles, fridge magnets and MRI scanners are some common examples of magnets.

It is said that magnets were discovered after a shepherd named Magnes accidentally got his iron stick stuck to a rock. It was later discovered that the said rock had magnetic properties and was called Magnetite, named so after the shepherd.

These days magnets come in different shapes and forms such as: horseshoe magnet, bar magnet, cylindrical or a ball-ended magnet, needle magnet etc. 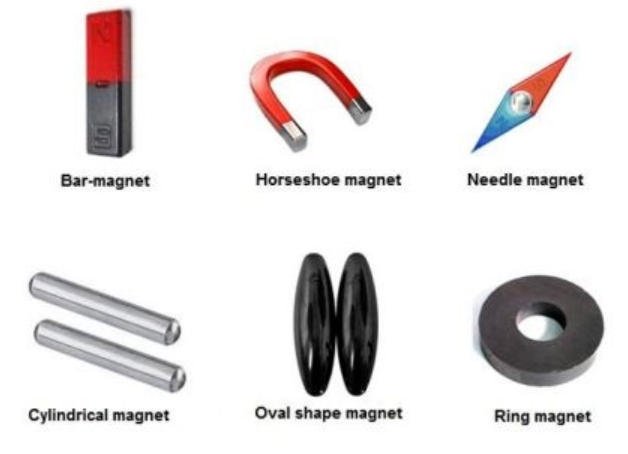 Magnetic Materials: Materials like nickel, cobalt and iron are called magnetic materials. These materials are attracted to magnets.

Non-Magnetic Materials: Materials like rubber, plastic, cloth, glasses etc. which are not attracted to magnets are referred to as non-magnetic materials.

We can observe a very interesting property about magnets which is that when we try to attract iron filings or any other magnetic objects to a magnet, they always accumulate at the ends of the magnet.

This is because near the poles the magnetic field of the magnet is very strong.

A Magnetic field is defined as the region around a magnet within which the magnetic force acts. Being strongest at the poles, this is why magnetic objects get attracted to the ends of the magnet. 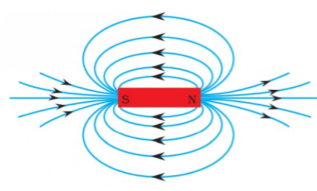 Magnetic fields around a bar magnet

Another great property of a magnet is that it can prove extremely helpful in navigating directions. This is because a freely suspended magnet always points in the North-South direction.

This property of magnet is used to make a compass. A magnetic needle is placed inside a box with directions marked on it. It is allowed to rotate freely so that when the compass is kept at the position of rest, the needle points towards the north and south direction.

Steps to make own Magnet

(i) Take a rectangular piece of iron. Place it on the table.

(ii) Take a bar magnet and place one of its poles near one edge of the bar of iron. Without lifting the bar magnet, move it along the length of the iron bar till it reaches the other end.

(iv) Repeat this process about 30-40 times. The iron piece has become bar magnet.

Attraction and Repulsion among Magnets

(i) Opposite or unlike poles i.e. North and the South Pole attract each and vice versa. 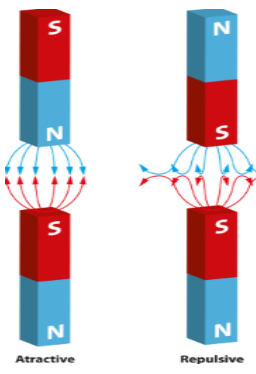 Attraction between opposite poles and repulsion between similar poles

(i) When heated, hammered or dropped from a height, magnets tend to lose their properties.

(ii) They become weak if they are not stored properly and hence:

Bar magnets should be stored in pairs separated by a small block of wood and their unlike poles facing the same side with a soft iron across their ends.

A piece of iron should be kept across the poles in case of a horseshoe magnet.

Magnets should be kept away from computers, mobiles, televisions etc. 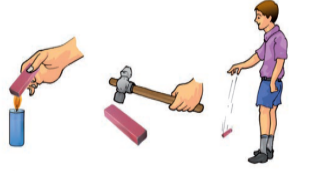 Magnets should be handled with care and they should be stored properly.