Solutions For All Chapters Maths Class 6

Ex 4.3 Class 6 Maths Question 1.
Name the angles in the given figure.

(a) In the interior of ∠DOE

(b) In the exterior of ∠EOF

Ex 4.3 Class 6 Maths Question 3.
Draw rough diagrams of two angles such that they have

(а) one point in common.

(b) two points in common. 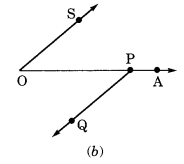 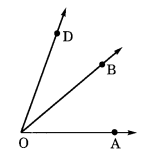