All the positive counting numbers starting from one are called Natural Numbers.

If we add 1 to any natural number, we get the next number, which is called the Successor of that number.

If we subtract 1 from any natural number, we get the predecessor of that number.

Remark: There is no predecessor of 1 in natural numbers.

Whole numbers are the collection of natural numbers including zero. So, the zero is the predecessor of 1 in the whole numbers.

(ii) Now mark the second point to the right of zero and label it as 1.

(iii) The distance between the 0 and 1 is called the unit distance.

This is the number line for the whole numbers.

1. The distance between two points

2. The greater number on the number line

3. A smaller number on the number line

The number on the left of any number is always smaller than that number.

Addition on the Number Line

Subtraction on the Number Line

Multiplication on the Number Line

1. Closure Property
Two whole numbers are said to be closed if their operation is also the whole number.

2. Commutative Property
Two whole numbers are said to be commutative if their result remains the same even if we swap the positions of the numbers.

3. Associative Property
The two whole numbers are said to be associative if the result remains the same even if we change the grouping of the numbers.

4. Distributivity of Multiplication over Addition
This property says that if we have three whole numbers x, y and z, then

5. Identity for Addition
If we add zero to any whole number the result will the same number only. So zero is the additive identity of whole numbers. 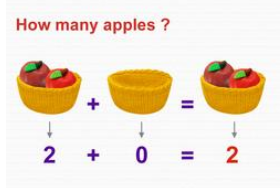 This clearly shows that if we add zero apples to 2 apples we get the two apples only.

Patterns are used for easy verbal calculations and to understand the numbers better.

We can arrange the numbers using dots in elementary shapes like triangle, square, rectangle and line.

1. We can arrange every number using dots in a line

2. We can arrange some numbers using a rectangle.

3. We can arrange some numbers using a square.

4. We can arrange some numbers using a triangle.

Patterns can be used to simplify the process.